So let’s get this straight: according to EW Jackson, people should NOT be able to, as the Christian Science Monitor explains, “object on religious or moral ground” to military service when taking the Oath of Allegiance, by omitting the words “bear arms on behalf of the United States when required by the law.” But the same EW Jackson goes nuts at any suggestion that people can’t object on religious grounds to their businesses serving gay customers cakes or whatever. As one friend of mine put it, “EW doens’t really much get consistency, does he?” And as another noted, “One person who might have objected to taking up arms? Jesus.”

P.S. It’s interesting that this language was added in 1950, at the height of Cold War hysteria/McCarthyism, “several years after the Supreme Court decided that the promise to bear arms was not implied in the overall promise to ‘support and defend the Constitution and laws of the United States of America against all enemies, foreign and domestic.'” 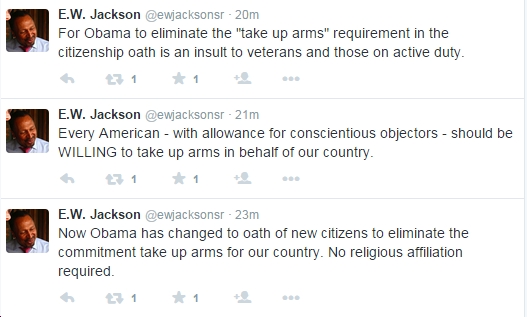