For a reminder, from the early days of Raising Kaine, about the pathetic record of Jerry Kilgore, check out 25AgainstJerry. The list includes: 1) “The Kilgore campaign has resorted to racial code language and “nativism”  repeatedly in this campaign”; 2) “Kilgore recently was subpoenaed in connection with a political eavesdropping scandal”; 5) “Kilgore has also received a significant chunk of change from Kansas-based Koch Industries;” 6) one of Kilgore’s big contributors was “Bob J. Perry of Houston, chief financier of the infamous ‘Swift Boat Veterans’; 10) “Kilgore was a miserable failure as Attorney General” (e.g., ” On his watch, drug arrests fell by nearly half, while forcible rapes increased 10%”); 14) “Kilgore’s family is notorious for corruption and brass-knuckle tactics.” Sounds like a perfect fit for Scott Walker…ugh. 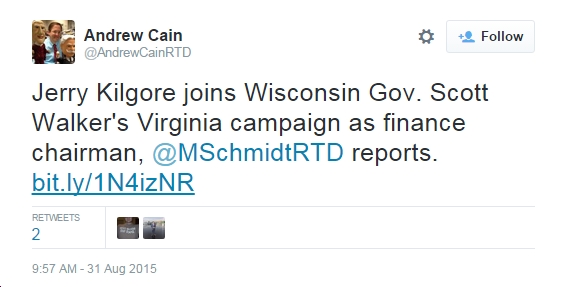