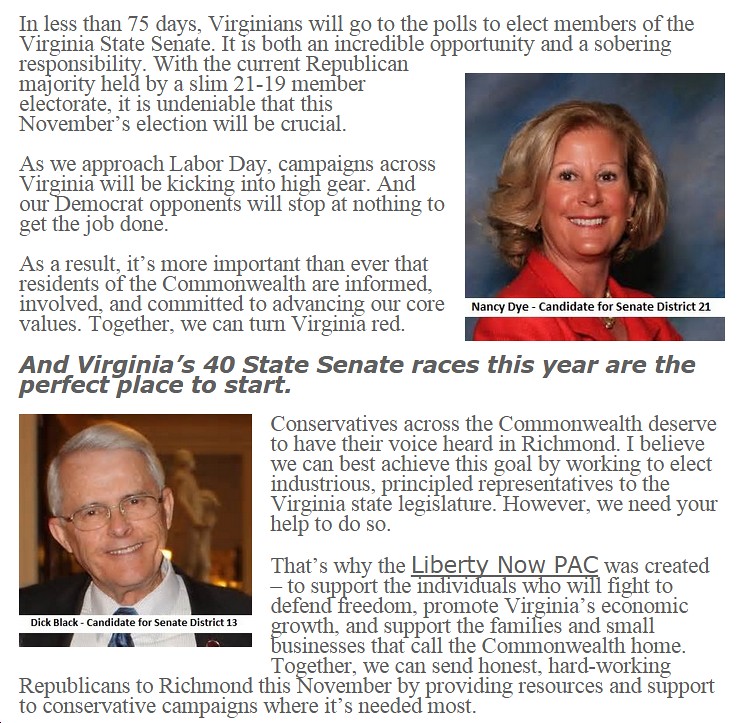 When a right-wing extremist nut like Ken Cuccinelli features candidates who are near and dear to his heart, every Democrat, independent, and moderate Republican should put those candidates on their short list of top priorities to defeat this November.

In this case, Cooch’s favorites include Sen. Dick Black, arguably one of the most extreme state legislators in the country, let alone the Commonwealth. A few “highlights” from Black’s infamous-if-not-illustrious career include: What Is It With Loudoun Republicans?!? Dick Black on Spousal Rape, “Nighties,” etc., The Truth About Dick Black (e.g., called birth control pills “baby pesticides,” passed out “pink plastic fetus dolls to state lawmakers in 2003 in a creepy campaign to win votes for various anti-abortion measures,” called “An Embarrassment to us all” by John Feegel, a former Chief of Staff to the Republican Leader in the Virginia House of Delegates); Republican Loudoun-sanity Continues: Dick Black Rails Against Gays in the Military (“there was a young fellow who went to the showers at night, there were two homosexuals lurking — they were also basic trainees – and they strangled him with a towel and forced him to submit to, you know, things that we won’t talk about”); Sen. Dick Black (R-Homophobia): Polygamy “just more natural” than homosexuality; VA Sen. Dick Black (R) Praises “Extraordinary Gallantry” of Syrian Armed Forces, GOP Candidate Who Made Marital Rape Remarks Drops Out of Congressional Rac, etc, etc.

So who in their right mind would feature this lunatic as a candidate they believe is deserving of his followers’ support? Well, Ken Cuccinelli of course, the same guy who has dabbled in “birtherism”, who denies climate change, who tried to make it easier for people to discriminate against gay people, who claims that Virginia can disobey federal laws it disagrees with, who believes the government is tracking his kids via Social Security numbers, who talks to a toy elephant named “Ron”, etc, etc. What else would you expect from this guy?

As for the other candidate Cooch features, Republican Nancy Dye, her big priority is to ensure that Virginia keeps sending nearly $5 million per day of our tax money out of state, and of course that hundreds of thousands of Virginians – many of whom are rural poor who live in the 21st State Senate district currently represented by State Senator John Edwards (D), and who would benefit greatly from the Medicaid expansion that Nancy Dye opposes. As would rural hospitals in the 21st district. So, when Dye claims that her top priority is creating jobs and boosting the economy, she should be asked by reporters how she reconciles that with her opposition to Medicaid expansion in Virginia, given that stopping that expansion is actually killing jobs and hurting our economy on a daily basis.

No wonder why someone utterly clueless on economics like Ken Cuccinelli, who for instance supports the dying, heavily-state-subsidized industries of the past (e.g., dirty energy) and opposes the booming, rising industries of the future (e.g., clean energy) would tout Dye as one of his favorites. They seem to think alike in many ways, and that’s a frightening thought which should give Democrats additional motivation to defeat her (and of course Dick Black) this November.