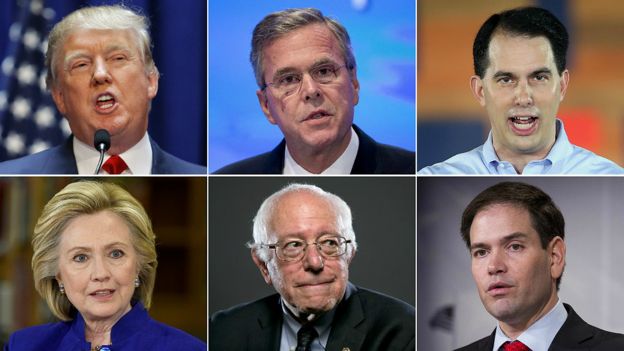 Unless you live inside a cave, under a rock, somewhere outside of internet or radio communications range, you’re probably well aware that there are heated races for the 2016 presidential nominations currently raging in both the Republican and Democratic parties right now. We’ve also seen the rise of populists and other “outsiders” like Donald Trump on the Republican side and Bernie Sanders (not really an “outsider” but feels like one in many ways) on the Democratic side. One thing’s for sure: there definitely don’t appear to be any “shoo-ins” or “clear-the-field” candidates right now.

So, you might assume that the people paid the big bucks to study this stuff day in/day out, prognosticate about it, analyze it, etc. would have seen at least some of this coming. Perhaps they might have picked up on voter restlessness and even anger out there? But did they? Let’s look back at a few of the political prognosticators and “insiders” and see what they were saying in 2013, 2014 and early 2015…and how well their predictions have panned out so far.

We’ll start with Washington Post’s Chris Cillizza, simply because he’s one of the most prolific and widely read political pundits around. Back on July 30, 2014, Cillizza wrote that “the idea that Bush would either a) clear the field or b) emerge as the un-questioned frontrunner — ala Clinton — simply isn’t born out in the polling or the policy positions.” Cillizza added, “Bush is a strong potential candidate for president, but he is nowhere close to Clinton’s status as a shoo-in if he runs.” Cillizza certainly turned out to be right about Bush not clearing the field or emerging as the unquestioned frontrunner, but it’s looking increasingly like that he was wrong about Clinton being any kind of “shoo-in,” let alone clearing the Democratic field.

Going back a bit further in time to Feb. 15, 2013, Cillizza ranked the 2016 Democratic contenders, with Clinton #1 as the “clear favorite,” followed by Joe Biden (a reasonable prediction at the time), Andrew Cuomo, Martin O’Malley, Deval Patrick, Mark Warner, Janet Napolitano (really?), Kirsten Gillibrand, Brian Schweitzer and Elizabeth Warren. Notice who’s not on that list? Right, no mention whatsoever of Bernie Sanders or of the progressive/populist movement he’s leading. Oh well. Finally, let’s look back to Feb. 8, 2013, with Cillizza’s “first rankings of the 2016 Republican presidential field!” This list had a bunch of folks in it, many of whom are now candidates, but none of whom are named “Donald Trump” (or “Carly Fiorina” or “Ben Carson” or “Ted Cruz” — all of whom are in the top tier of the polls at this point).

I like Steve Kornacki, but his Feb. 27, 2013 prediction is looking a bit shaky right now: “I would say there’s a decent chance Clinton actually could clear the field and face no serious opposition for the nomination…I’m not calling Clinton a shoo-in for the nomination, or even predicting she’ll run. I’m just arguing that if she does, she could break the mold for non-incumbent candidates of the modern era.” Uh…maybe not.

Now here’s someone who nailed it — Harvard’s Kennedy School of Government faculty member Nicco Mele, who was also “Howard Dean’s webmaster during the former Vermont governor’s 2004 presidential run.” According to Mele, speaking back in April 2013:

The primary lesson of the last four cycles, maybe five cycles, is that the advantages of the establishment are greatly diminished, perhaps completely obliterated,” Mele told POLITICO. “The notion that she can coast to front runner status on her history and contributions to the Democratic Party certainly didn’t hold true in 2008, so I don’t see any reason it’ll hold true in 2016.”

Mele’s main argument is that technology helps float candidates to the top, while the kind of small donors that helped usher President Barack Obama into office like to root for someone new.

…Mele does point out two possible weak spots in his argument. “If Hillary’s running against other household names – Joe Biden and Al Gore, for instance – then maybe she has a chance,” Mele said. “But if she’s running against an insurgent that nobody has ever heard of who at least has a little bit of charisma and a compelling story and executes online, then she has no advantage.” And the allure of a first female president could trump his analysis. “It may be that the first woman president trumps digital insurgency,” says Mele. “But I doubt it.”

There’s a long way to go, but right now Mele’s predictions made back in early 2013 are looking pretty darned accurate.

One who completely missed what’s happening is Nate Cohn of the New York Times. Writing in March of this year, Cohn argued that “Hillary Clinton is a primary candidate whose strength has little precedent, one who seems poised to sweep the primaries without facing any serious challenge.” Again, it’s quite possible – even probable – that Clinton will end up winning the Democratic nomination, but the concept that her strength was almost without precedent, and that she would “sweep the primaries without facing any serious challenge” is turning out to be far off base.

Closer to home, UVA political science Professor Larry Sabato looked into his “crystal ball” in February 2014 and saw the Republican field as having “nothing but questions.” That’s looking like a strong prediction at this point. What’s not looking as strong are Sabato’s predictions for the leading Republican candidates: Scott Walker, Rand Paul and Chris Christie in his “first tier;” Marco Rubio, Ted Cruz and John Kasich in his “second tier;” Jeb Bush, Mike Huckabee and Paul Ryan as “wild cards;” Rick Santorum and Rick Perry as “also rans.” Instead, according to the Real Clear Politics polling average, right now it’s looking more like Trump as the frontrunner for the GOP nomination, with Jeb Bush as the runner up (although looking shakier recently) and a bunch of others – Walker, Rubio, Carson, Huckabee, Cruz, Paul, Fiorina, etc. – in the running. As for Sabato’s “tiers,” they’ve basically been scrambled, rearranged, thrown into disarray, etc.

On the Democratic side, Sabato’s “crystal ball” in February 2014 had Hillary Clinton alone in the “first tier,” noting that she “[c]an potentially scare away most/all strong opponents if she runs (unlike ’08).” After that, Sabato had Joe Biden alone in the “second tier,” with Martin O’Malley and Brian Schweitzer in the “third tier,” Howard Dean as a “wild card” and several others (Cuomo, Warren, Warner, Gillibrand) who might consider running only if Clinton didn’t run. There was no mention of Sanders, Webb or Chafee at that point, let alone that Sanders would be drawing crowds of 20,000 people or whatever in the summer of 2015. In fairness, I’m not sure ANYONE saw that one coming.

Bottom line: from this limited sampling, most political pundits were assuming essentially a coronation (of Hillary Clinton) on the Democratic side, with a more wide-open race on the Republican side, and no mention of Bernie Sanders or Donald Trump, arguably the two biggest stories of this race so far. Of course, as the saying goes, “It’s tough to make predictions, especially about the future.” Still, it’s striking to me how almost nobody (myself included) saw the populist, anti-establishment “wave” – not to mention the chaos (e.g., 17 Republican candidates)! – coming. So stay tuned…because most likely nobody really knows what will happen next.