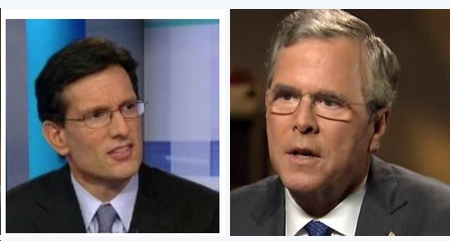 First, here’s the response by the Democratic National Committee to this ridiculous endorsement.

“Eric Cantor was defeated by GOP primary voters for being too cozy with Wall Street and the GOP establishment, and Jeb Bush is being relegated to middle-of-the-pack status by GOP presidential primary voters for exactly the same reasons. Jeb Bush seems to go out of his way to show he’s out of touch.” – Christina Freundlich, DNC spokeswoman

‏@realDonaldTrump “Who wants the endorsement of a guy (@EricCantor) who lost in perhaps the greatest upset in the history of Congress?”

‏@IngrahamAngle “Kiss of Death Alert: Eric Cantor will endorse Jeb Bush on Thurs. evening and will

@LOLGOP “If Jeb Bush had convinced Eric Cantor to endorse Donald Trump, that would have helped Jeb.”

@hotairblog “Eric Cantor to endorse – who else? – Jeb Bush”

@chucktodd “Jeb’s announcement of his VA co-chairs, which includes Eric Cantor, also interesting for who is NOT on it… ex-Bush 43 aide Ed Gillespie”

@jeisrael – “Endorsement from Eric Cantor, the right winger so corporate the Tea Party voted him out, speaks volumes about Jeb!”

I’d just add that both Can’tor and Bush are two corporate peas in a corrupt pod, that this endorsement might help Bush with fundraising as he tries to buy the nomination, but that it clearly will backfire/is backfiring with the right-wingnut “base.” Gotta love it.

P.S. According to Politico: “Cantor is to introduce Bush on Thursday evening at a fundraiser in Richmond and then will appear with him Friday morning at a VFW post in Norfolk, for a town hall focused on veterans issues. Bush’s other Virginia state co-chairs are Kay Coles James, director of the Office of Personnel Management under President George W. Bush, and John Hager, former Virginia lieutenant governor. Both will attend the fundraiser.”