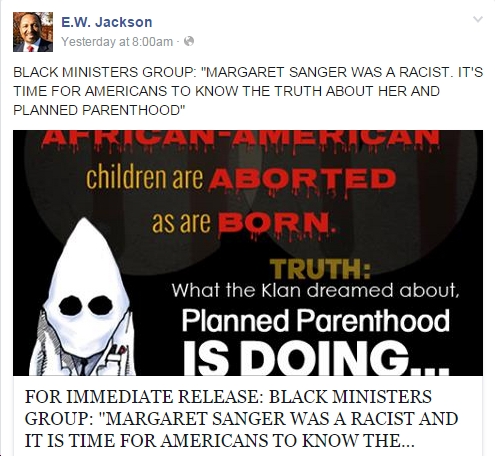 It will never cease to amaze me that E.W. Jackson, a crazy person and also someone who’s as extreme as you can get in this country, was the 2013 Virginia GOP’s nominee for Lt. Governor of our state. Jackson’s constant ravings are disturbing, although amusing in a twisted way. But his latest lunacy is…well check it out and decide for yourself.

BLACK MINISTERS GROUP: “MARGARET SANGER WAS A RACIST AND IT IS TIME FOR AMERICANS TO KNOW THE TRUTH ABOUT HER AND PLANNED PARENTHOOD”

NORFOLK, VIRGINIA- A national group of predominantly black ministers – MINISTERS TAKING A STAND (“MTS”) – has denounced Planned Parenthood as a racist organization. Margaret Sanger, Planned Parenthood founder, has a history that includes support for eugenics as well as racist motivations to limit the number of births of black babies. Planned Parenthood founder Margaret Sanger, supported eugenics and was a devout racist who sought to limit the number of black births. Bishop E.W. Jackson, National President of the group, said, “If Planned Parenthood is trafficking in baby body parts, you can be sure that many of the babies they are ripping apart and selling on the auction block are black. Yet the liberal media fails to expose this truth. If black lives truly matter, the lives of unborn black children matter.”

In fact, FactCheck.org looked at this charge (by Herman Cain back in 2011), and found “no support for that old claim.” None. FactCheck.org further noted that just “9 percent of abortion clinics in the U.S. are in neighborhoods in which 50 percent or more of the residents are black.” On the other hand, Planned Parenthood DOES provide important health care services to poor and minority women, which means cutting funding for Planned Parenthood simply means that many “poor women will go without breast and cervical cancer screening, HIV tests and sexually transmitted disease treatment,” which is both “wrong and hurtful.”

Not that E.W. Jackson and his ilk care about any of this, nor do they care about perpetuating insane falsehoods about Planned Parenthood (e.g., that the organization is racist, hell-bent on aborting – and even selling – black babies) that have been debunked over and over again. Of course, that didn’t stop E.W. Jackson’s 2013 running mate, Ken Cuccinelli, who “said he won’t defend the statements of lieutenant governor candidate E.W. Jackson, including his assertion that Planned Parenthood has ‘been far more lethal to black lives than the KKK,'” but who also “has drawn similar connections between Planned Parenthood and racism.” Amazing.