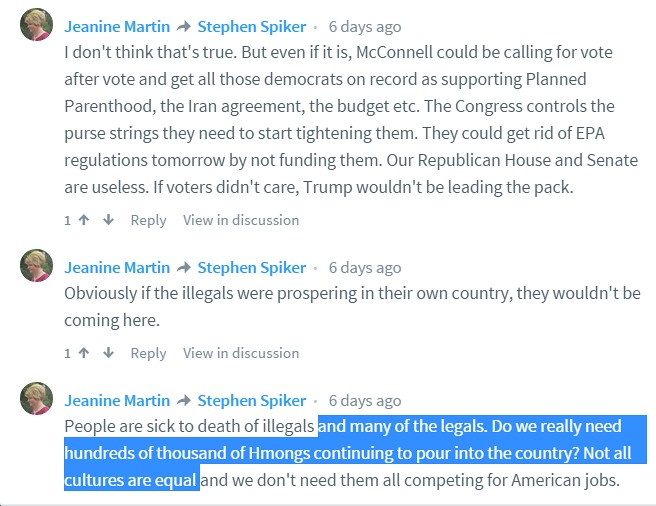 As a Democrat, of course I love seeing posts like this one — Republicans at each other’s throats and all that good stuff. But it’s also good to see as an American and a human being who finds “racists” and “nativists” to be a disgrace to our country and our species. So, kudos to recent Republican Party of Virginia Executive Director Shaun Kenney for declaring war on what he calls – in the aftermath of racist remarks by leading Virginia right-wing blogger Jeanine Martin – the (nativist/racist) “scum” of his party. Key points.

*”Bearing Drift and a host of other outlets in the Virginia blogosphere have desperately tried to maintain their independence from the Republican Civil War, with little effect, which in turn forces many of us to choose sides.”

*”…it is incredulous [sic] to believe for a moment that conservatives will and should willingly work with rank nativists and racists.”

*”For the better part of a decade, we have seen this ‘malevolent crew’ run amok and do precisely this: destroy institutions and profit in the exchange…ultimately the Republicans of the mid 20th-century were wise to reject the populists and racists in toto – no matter how hard the Democrats attempt to pin both upon us in the wake of the Southern Strategy of 1964. That marriage occurred in 1994, when the Ross Perot faction welded itself to the GOP.” (note: I disagree that Democrats attemped to “pin” the populists and racists on Republicans post-1964; to the contrary, Republicans worked very hard to win over former “Dixiecrats” to their party through their infamous “Southern Strategy” — see the superb movie Boogie Man for more on this).

*”Until conservatives have the moral courage to stand up for fellow conservatives, and drive out those voices who tear down ‘hmongs’ and others, we’ll never become the conservative movement we ought to be.”

*”The [intra-Republican] civil war between the conservatives and the populists has been long overdue, and it’s time to clean house and make a clear and unambiguous break from those who would introduce racist or nativist sentiment into our Republican Party.”

I agree that Republicans SHOULD pure the racists and nativists from their party (I’d also suggest they purge the theocrats and bigots of all kinds), except that I don’t think it’s likely to succeed for one simple reason: Racism and xenophobia are exactly why Republicans love Donald Trump, polls show. Throw out all the “birthers,” xenophobes, racists, homophobes, etc. from today’s “insurgent outlier” Republican Party and what do you have left? A small, rump, “Chamber of Commerce” party with no chance of winning a majority for president, Congress, state legislatures, etc. Which is perfectly fine with me, but I just don’t see it happening for at least several more years to come…