Over 150 citizen protesters amassed on the Blue Ridge Parkway bridge atop Afton Mountain, with another 135 at the bridge across the James River at Wingina, which is miles and miles from the nearest town. In Montgomery County, VA, over 100 citizens stood across a field which is on the path of the proposed Mountain Valley Pipeline, and in Franklin County, VA citizens marched to the Franklin Government Center where they asked their Board of Supervisors to help them protect their water and streams by petitioning the Governor to require pipeline companies to submit site specific erosion and sediment control plans should the MVP ever be built. In western Augusta County, 32 people cheered and sang protest songs in the pouring rain to protest the proposed Atlantic Coast Pipeline. In Richmond, over 60 citizens met at Dominion headquarters and marched to the Governor’s office supporting the actions held in localities directly affected by the proposed 42″ high-pressure behomeths being proposed in Virginia. Other Virginia communities which participated were Floyd, Bent Mountain, Roanoke, and Front Royal. 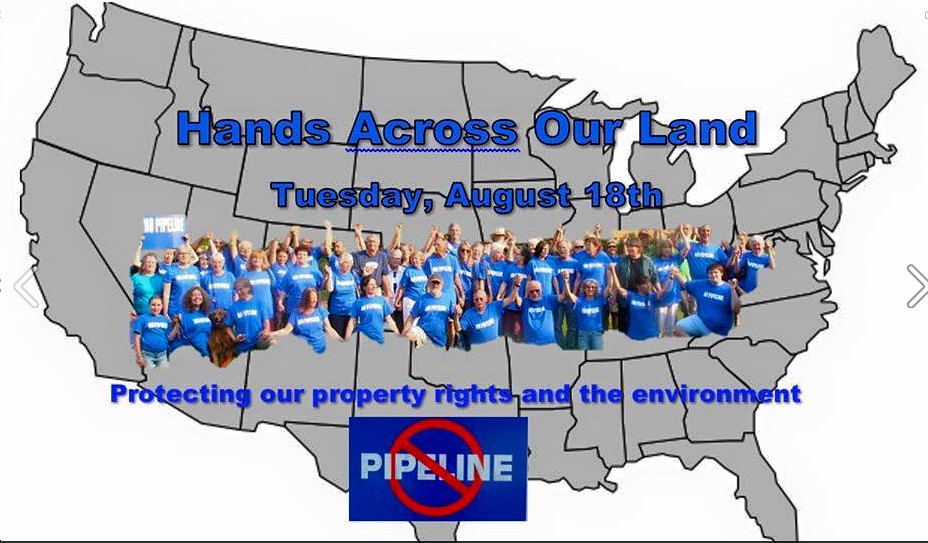 In Texas, citizens gathered to defend the Big Bend area of the state against the Trans Pecos Pipeline and in Oregon, they stood chanting and waving signs against pipelines and two liquid natural gas export facilities. Similar activities were seen in Youngstown, OH, Pulaski and Point Marion, PA, as well as Myersville and Cove Point Beach, MD. In New York, Westchester County participated. In North Carolina, communities in Chatham, Lee, Stokes, Johnston and Cumberland Counties fighting fracking, and the proposed ACP stood hand-in-hand

to tell their governments and the industry they will not back down and will not become a sacrifice zone by a greedy and corrupt industry which puts profit before people.

In West Virginia, which recently ruled against EQT accessing private property without landowner permission, groups in Monroe, Greenbrier, and Doddridge Counties stood up against the continued degradation of their communities and their health and safety. Doddridge is the epicenter of fracking in the Marcellus shale. Wayne Woods, spokesman for the community Watershed Association said, “We want people to know there are people here who do care about our air, water and environment.”

We provide you with a selection of photos from the protests to exhibit the growing strength and passion of this movement to protect our communities and stop the ill-conceived business plan to use natural gas as a bridge to renewables.