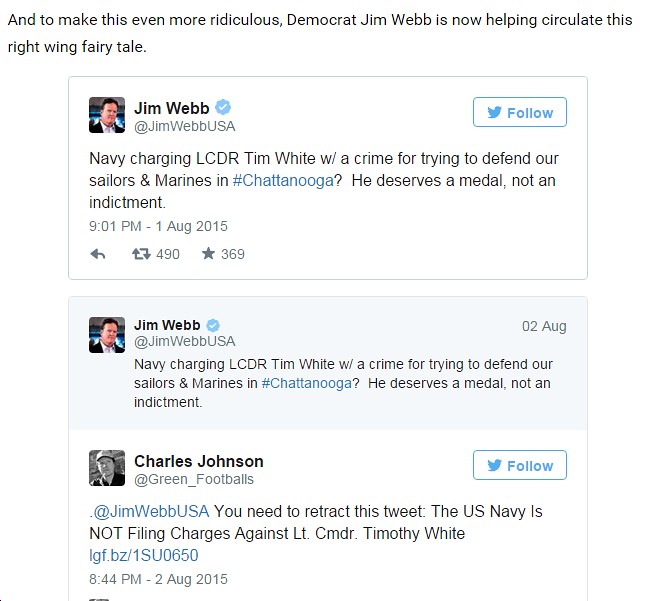 When the deranged nutcase opened fire on the Marine and Navy recruiting offices in Chattanooga, one of the Naval recruiters – LCDR Tim White – had his personal firearm with him and returned fire.

Now the rightwing bulls*** machine is filled with a story claiming the Navy is bringing charges against LCDR White. The claim IS NOT TRUE. Despite this, Jim Webb has now picked up on the lie and is demanding the charges — the non-existent charges, that is — be dropped.

See No, Conservatives – the US Navy Is NOT Filing Charges Against Lt. Cmdr. Timothy White for more.

Here we go again. It’s one fake story after another from the right wing, and tonight they’re all screaming in unison about a completely bogus outrage launched by discredited war criminal Allen West and quickly picked up by the Stupidest Man on the Internet, Jim Hoft, without ever checking to see if it was actually, you know, true. And from there it’s rapidly spreading throughout the idiotic right wing media…And to make this even more ridiculous, Democrat Jim Webb is now helping circulate this right wing fairy tale.