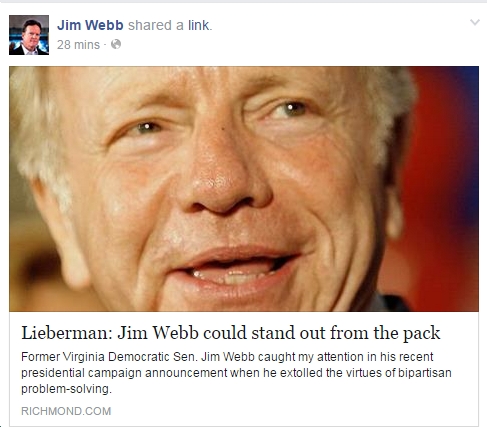 Seriously, the Webb campaign is touting its support from someone basically no Democrat – obviously, we’re not counting LIE-berman’s pals’ John McCain and Lindsey Graham here – likes. And for good reason. Consider that LIEberman spoke at the 2008 Republican convention in support for John McCain and Sarah Palin (LIEberman: “Governor Palin, like John McCain, is a reformer. She’s taken on the special interests and the political power-brokers in Alaska and reached across party lines to get things done. The truth is, she is a leader we can count on to help John shake up Washington.”). Consider also that LIEberman was one of the most vociferous opponents of a public option, in the Affordable Care Act. Consider also that LIEberman “spoke before the Senate Foreign Relations Committee in support of the confirmation of Sam Fox as ambassador to Belgium… Fox, a prominent Republican businessman and political donor, was a contributor to the Swift Boat Veterans for Truth campaign in 2004.” Consider also that LIEberman “blasted President Obama for stripping terms like ‘Islamic extremism’ from a key national security document, calling the move dishonest, wrong-headed and disrespectful to the majority of Muslims who are not terrorists.” Consider also that LIEberman opposes the Iran nuclear deal and, essentially, favors war with Iran as the only alternative. We could go on and on all day, but the bottom line is that no Democrat should want to be caught dead – for purely political reasons, not to mention substantive policy ones – touting LIEberman’s support and/or endorsement. Yet that’s exactly what the going-nowhere Webb campaign did this morning.

The comments on Webb’s Facebook page, which keep in mind is filled mostly with his supporters, are hilarious in that context.

*”‘I wonder what Joe Lieberman thinks about Democratic politics these days,’ said no one, ever.”

*”This is ‘The Kiss of Death’ for any Democrat.”

*” Oh, Lord. Hardly a compelling endorsement and certainly not a face I want to see on Sunday morning.”

*” So you don’t want the Democratic nomination, Senator? That’s the only explanation I can come up with for this post.”

*”Not a very good endorsement. Nobody likes Joe Lieberman.”