When it comes to “The Donald”, those

working to keep track of his misstatements, falsehoods, anti-science (non)reality simply might not have enough terrabytes of computer memory to maintain a full record or hours in the day to keep up with the speed of inanity spewing from his mouth.

Last night, watching a brief account of the political centerpiece of the world (the Iowa State Fair), I saw an item — without, of course, any reporter challenge — to add to that list.  The @RealDonaldTrump was going on about his signature concept of a border fence with Mexico.  And, he then went on to say just how easy it would be to enforce and that tunneling wouldn’t work to get around it as …

Okay, truth in advertising, this is a paraphrasing — didn’t catch it word for word and don’t plan on searching for a transcript of a randomly seen news report.  But, it is an accurate paraphrasing of ‘meaning’ and substance.

Now, this is a pretty small item out of the inanities that “The Donald” puts out but it is a very clear item related to ‘fact’: can we ‘easily’ detect tunnels from overhead?

No, Donald, it ain’t so easy to find a tunnel.

And, well, who in the media will bracket showing the @RealDonaldTrump’s ‘ease of finding tunnels’ comments with quotations from actual experts showing that his comments are simply wrong, demonstrating ignorance and a flagrant lack of concern for actual truthful engagement?

How do I know this?   One of the best discussions re tunneling appeared recently in The New Yorker, How the Sinaloa drug cartel digs its tunnels, and I happened to have read it just hours before “The Donald” pontificating at the Iowa State Fair. And, as per above, this article makes clear why drug smugglers use tunnels: they enable moving lots of goods and they are hard to detect.

San Diego Tunnel Task Force owns two ground-penetrating radar devices that look a bit like push lawnmowers. The machines fire electromagnetic signals deep into the ground, and an L.C.D. screen shows the patterns of the waves as they ricochet back to the surface. The agents do not use these machines often, because they aren’t very effective.

And, as per above, it isn’t just here that it is hard:


For decades, tunnels have defied detection by satellites, motion sensors, and thermal imaging systems. During the Vietnam War, when the Vietcong used underground passages like the Cu Chi tunnel network to launch surprise attacks, the Army had no effective tunnel-detection technology, so it had no choice but to send infantrymen-“tunnel rats”-on dangerous search-and-destroy missions. Serious research into tunnel detection began in the mid-nineteen-seventies, after intelligence indicated that Kim Il-sung, the President of North Korea, had dug more than twenty tunnels across the border into South Korea, for use in a future invasion. The Defense Advanced Research Projects Agency attempted to design reliable detection technology using seismic and electromagnetic waves, to no avail.

In 2005, the U.S. government funded the Tunnel Detection Initiative, which recruited academics, industry specialists, and military engineers to detect excavation near the border. “It seemed like a really simple problem,” Nedra Bonal, one of the geophysicists who worked on the initiative, said. “You have a hole in the ground, and I thought I’d look at the seismic data, and that would be that.” But, according to a government report, the proposals yielded “massive amounts of data and unacceptably high false alarm rates.”

For many (perhaps even most) people, it probably seems a truthism that it ‘should be easy’ to find tunnels.  However, as the above shows, the truth is that this is a hard and not yet ‘solved’ problem.  Would voters perceptions of political candidates be impacted with clear evidence of when their policy concepts rest not on shifting sand but on simple ignorance, errors, and falsehoods?

The American media, writ large, are focused on ‘horse race’ when it comes to politics.  Too rarely, if ever, does political discussion actually delve into real substantive policy issues. And, one has to wonder whether they have the time of day for telling people when (Republican) political elites are simply off base from reality.

From denial of climate change science to denial that President Barack Obama was born in the United States (Donald as proud Birther) to ignorance of how hard it is to find a tunnel, Donald Trump is simply out-of-touch with / living in a distorted (Tea Party?) reality. 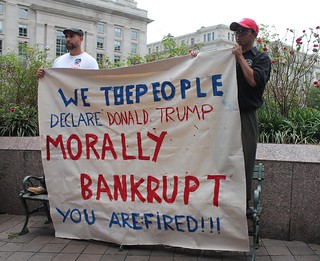 And, while the @RealDonaldTrump might be an extreme case, this is true across the horde that is the GOP’s presidential primary pool.