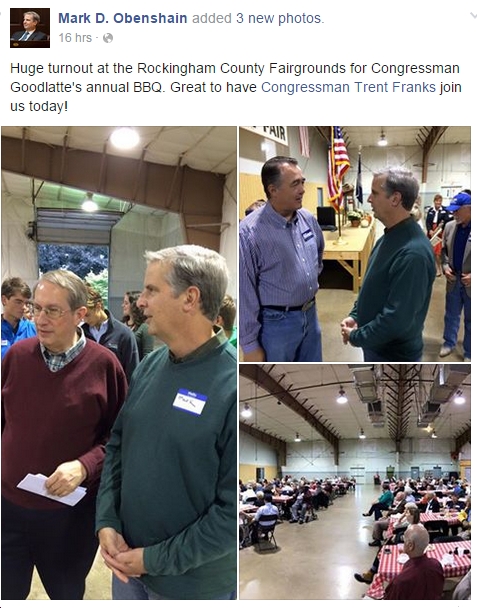 *”In late 1987, Franks founded the Arizona Family Research Institute, a nonprofit organization affiliated with James Dobson’s Focus on the Family.[10] He was the Executive Director of the organization for four and a half years.” Note that Focus on the Family was listed by the hate-group-monitoring Southern Poverty Law Center as one of a “dozen of today’s most influential anti-gay groups.”

*”Franks had been under investigation following an Associated Press report about his decision to spend nearly $60,000, without getting bids, for a conference at a former campaign contributor’s hotel.”

*”In 1992, when Franks was chairman of Arizonans for Common Sense, one of the organization’s efforts was a constitutional amendment on the November 1992 ballot in Arizona that banned most abortions. The initiative lost, getting about 35 percent of the votes cast.”

*”On October 14, 2009, Franks joined with three fellow Representatives in calling for the investigation of the Council on American-Islamic Relations (CAIR) over allegations of trying to plant ‘spies,’ based on a CAIR memo indicating that they ‘will develop national initiatives such as Lobby Day, and placing Muslim interns in Congressional offices.'” Yes, Franks is both a loony-tunes conspiracy theorist and a raging/raving anti-Muslim bigot.

*”In September 2009, he stirred controversy when criticizing President Barack Obama. He said ‘Obama’s first act as president of any consequence, in the middle of a financial meltdown, was to send taxpayers’ money overseas to pay for the killing of unborn children in other countries. Now, I got to tell you, if a president will do that, there’s almost nothing that you should be surprised at after that. We shouldn’t be shocked that he does all these other insane things. A president that has lost his way that badly, that has no ability to see the image of God in these little fellow human beings, if he can’t do that right, then he has no place in any station of government and we need to realize that he is an enemy of humanity.'” Yep, that’s typical Trent Franks’ hyperbole and looniness.

*”In a 2010 interview, discussing the legacy of slavery which Franks described as a ‘crushing mark on America’s soul’, the congressman said, ‘Half of all black children are aborted. Far more of the African American community is being devastated by the policies of today than were being devastated by the policies of slavery.‘” Yep, Franks said that s*** too.

*”In June 2013, he proposed a bill that would ban abortions after 20 weeks without exceptions for rape and incest. In defense, he stirred controversy when saying that ‘the incidents of rape resulting in pregnancy are very low.’” And Franks said that s*** too.

*Franks is a climate science denier, saying, “I have yet to see clear and convincing evidence that it exists beyond historical fluctuations.” In fact, 97%-99% of climate scientists believe that there very much IS “clear and convincing evidence” of man-made global warming, but then again, Franks worked in the oil industry and is a total corporate tool, so what else would you expect from the guy but crap like this?

So…the fact that Bob Goodlatte and Mark Obenshain were hanging out with Trent Franks this weekend, and that they think it’s really cool that they were, says what about Goodlatte and Obenshain? Yep, exactly.