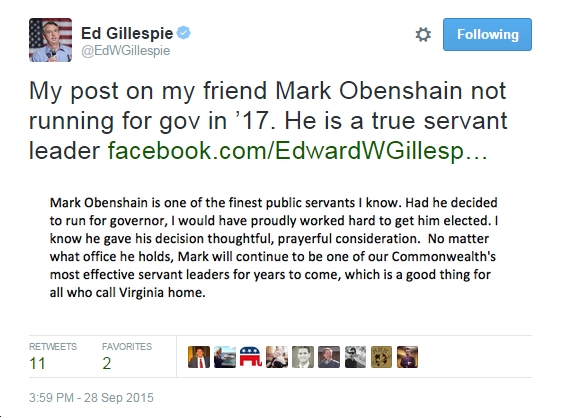 Good riddance to an extremist nutjob on one level; but on another, Obenshain would have been much easier to beat than, let’s say, Ed Gillespie. Hmmmm.

State Sen. Mark D. Obenshain said Monday that he will not run for Virginia governor in 2017.

…Obenshain’s decision to bow out of the race could clear the field for Ed Gillespie, a former political strategist who successfully united warring factions of the state GOP last year to nearly topple U.S. Sen. Mark Warner.

“I hope Ed Gillespie will run,” Obenshain said. “You can quote me on that. I’ll wait to hear from him what his intentions are, but I sure hope he runs.”

So…what I’m concerned about is that we swept the statewide races in 2013 in large part because the Republicans were foolish enough to nominate a basically unelectable “extreme team” (Cooch/EW Jackson/Obenshain). If they go with a more moderate-SEEMING ticket (even if it isn’t much more moderate in reality) headed up by Ed Gillespie, that would be MUCH tougher for Dems to beat. Also, last year, Gillespie barely lost to Mark Warner, widely considered the Greatest Politician Ever in Virginia Politics (or something like that), so this will definitely not be easy. Finally, assuming Democrats win the White House next year, Republicans are likely to be pissed off (yeah, yeah, I know, they’re always pissed off – lol) and Democrats back to sleep (yeah, yeah, I know, Dems always go to sleep in non-presidential election years here in Virginia). Anyway, the bottom line is that I was very much looking forward to a Mark Obenshain for Governor candidacy in 2017, and am bummed he’s not running.

P.S. Of course, if Republicans go with a convention again, and let’s say a right-wing nutjob like Ken Cuccinelli runs against Gillespie for the nomination, I’m not sure who would win that one. So please, RUN KEN RUN! 😉