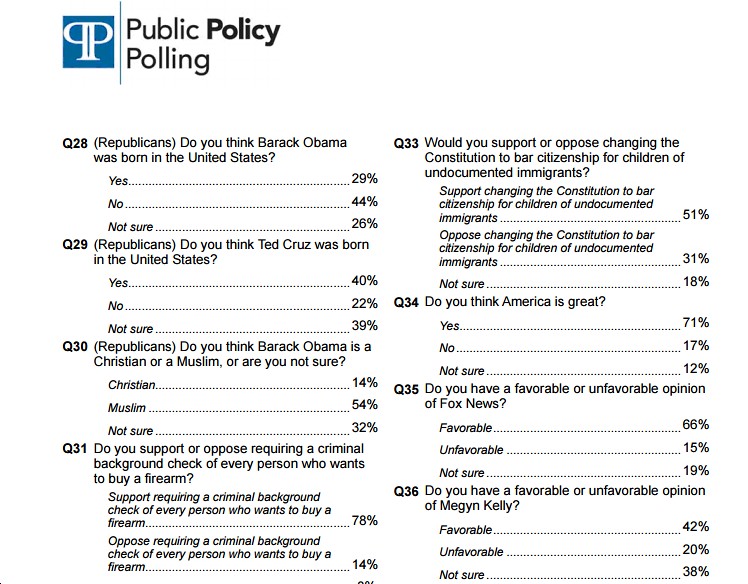 Sure, Donald Trump supporters may be a bit crazier and more extreme than likely Republican voters in general, but according to a new national poll, they’re basically all cuckoo.

Trump’s beliefs represent the consensus among the GOP electorate. 51% overall want to

eliminate birthright citizenship. 54% think President Obama is a Muslim. And only 29%

grant that President Obama was born in the United States. That’s less than the 40% who

Of course, this is the same electorate that has Donald Trump in first place and the even more extreme (if that’s possible) Ben Carson in second place nationally. They’re also the same folks who don’t “believe” (as if science is a matter of “belief”) in global warming (66% of these folks don’t “believe” in it, even though there’s overwhelming scientific evidence, dating back a century or more, in support of it) or evolution (49% don’t “believe” in it, even though it’s one of the most fundamental, well-supported theories in all of science). And they’re the same folks who support “establishing Christianity as the national religion,” which of course completely violates one of the most important, underlying values – separation of church and state, tolerance of other religions than the majority one – that make us American. What’s amazing is that anyone could make it through K-12 (let alone college!), get hired by a company, or succeed in life in any way with such disordered, bizarre ways of “thinking.” But there it is…ladies and gentlemen, your 2015 Republican Party’s primary electorate! Gack.