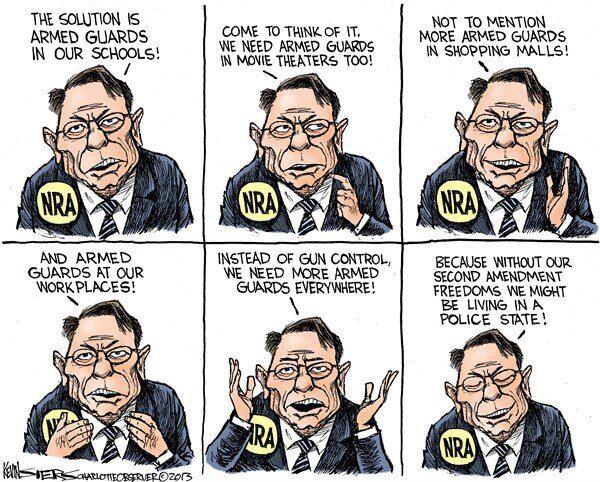 The NRA’s Virginia grades are out, and they are a great guide for who Virginia voters should NOT elect on November 3. That is, unless you’re one of the small minority of Virginians who agrees with the gun lobby. For instance, see this Quinnipiac poll of Virginians. Here are a few highlights:

*”58-39 percent support for a national ban on assault weapons”

Also note that the NRA Board of Directors is filled with extremists and unsavory characters (to put it mildly) like Oliver “Convicted Iran-Contra Ex-Felon” North, Ted “Obama, he’s a piece of shit. I told him to suck on my machine gun” Nugent, Grover “Drown Government in the Bathtub” Norquist, etc. ‘Nuff said about the NRA, except that getting an “A” rating from this group should be a clear signal not to vote for the person getting the high grade. Now, to the Virginia candidates in contested elections who you most definitely should NOT vote for this November.

District 6: Republican Richard Ottinger (NRA Grade: B), although note that Democrat Lynwood Lewis has a high grade (“B”) as well…not good.

District 7: Republican Frank Wagner (NRA Grade: A), who is also a corrupt tool of Dominion as an added bonus.

District 8: Republican Bill DeSteph (NRA Grade: A), who is also a raving Islamophobe to boot.

District 10: Republican Glen Sturtevant (NRA Grade: A), who pretends to be moderate but is anything but.

District 13: Republican Dick Black (NRA Grade : A), who is possibly the most extreme and craziest member of the Virginia General Assembly, which is saying a lot given the cast of characters there.

District 21: Both Republican Nancy Dye and Democrat John Edwards get “A” grades from the NRA, so you’ll have to make your decision here on other issues such as Medicaid expansion and vote for Edwards.

District 26: Republican Mark Obenshain (NRA Grade: A), the same extremist who has tried to criminalize women who have miscarriages.

District 29: Republican Hal Parrish (NRA Grade: A-), who like Sturtevant pretends to be a moderate but is anything but.

House of Delegates ratings on the “flip”

District 13: Republican “Sideshow Bob” Marshall (NRA Grade: A); this should be a close race with Democrat Don Shaw, so make sure you get out and vote if you’re a Democrat living in the 13th!

District 42: Republican David B. Albo (Grade: B+); vote for Democrat Joana Garcia instead!