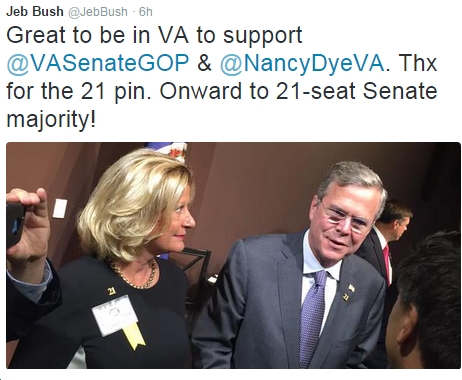 Earlier today, as almost everyone else was riveted on Pope Francis’ visit to America, “JEB” Bush was busy doing the thing he’s by far the best at — political fundraising, in this case in Bristol, Virginia. That’s ok, but Bush’s message certainly wasn’t ok. Nor was it in any way, shape or form in line with Pope Francis’ teachings on caring for our common home, whether in Laudato Si or in Washington, DC yesterday and today. In short, Pope Francis agrees with climate scientists that we need to transition rapidly off of fossil fuels and onto clean energy. As Pope Francis wrote in Laudato Si:

…most global warming in recent decades is due to the great concentration of greenhouse gases (carbon dioxide, methane, nitrogen oxides and others) released mainly as a result of human activity. As these gases build up in the atmosphere, they hamper the escape of heat produced by sunlight at the earth’s surface. The problem is aggravated by a model of development based on the intensive use of fossil fuels, which is at the heart of the worldwide energy system…

…many of these symptoms indicate that such effects will continue to worsen if we continue with current models of production and consumption. There is an urgent need to develop policies so that, in the next few years, the emission of carbon dioxide and other highly polluting gases can be drastically reduced, for example, substituting for fossil fuels and developing sources of renewable energy.

Pretty clear, huh? Now, let’s contrast this clarion call to protect our common home – one which is totally consistent with what science is telling us – with what “JEB” Bush, who talks frequently about his Roman Catholic faith, had to say earlier today in Bristol, Virginia on this topic.

“I think we need to roll back the aggressive EPA for starters, not just as it relates to coal,” Bush said on the heels of the release of his plan to de-regulate various segments of the federal government.

“This administration has had as a strategy. Their whole effort has been to destroy the coal industry and all the communities that are associated with it.”

…”Put aside Pope Francis on any political conversation. I oppose the President’s policies as it relates to climate change because it will destroy the ability to re-industrialize the county, for people to get higher wages, and for people to get jobs.”

In other words, “JEB” is not only the diametrical opposite of Pope Francis when it comes to environmental protection and energy policy, he’s also the diametrical opposite of 99% of climate scientists, who warn that we need to get off of fossil fuels ASAP or risk dangerous, even disastrous, global climate chaos. In short, “JEB” is just completely wrong on every level when it comes to energy policy, environmental protection, the need for strong EPA regulation of polluting industries, etc.

By the way, it’s not just this issue either on which “JEB” is wildly out of step with Pope Francis. Add in, of course, “JEB”s 180-degree difference with Pope Francis when it comes to economics, inequality, concern for the poorest and most vulnerable among us, etc. (“JEB,” of course, is all about the top 0.1%). Then toss in Bush’s bizarre comments on “multiculturalism”, his worse-than-bizarre comments on “anchor babies” (a dehumanizing, disgusting term) and his offensive rhetoric towards both Latinos and Asians, and basically “JEB” is the anti-Pope Francis. No thanks.

P.S. All this pandering to the anti-environment, science-denying, do-whatever-the-fossil-fuel-industry-tells-you-to-do wing of the Republican Party doesn’t seem to be helping “JEB” much. For instance, see the Washington Post story from earlier this evening, Jeb Bush is in 5th place in a new New Hampshire poll. That’s not the really bad news. Not that Trump, Carson, or Fiorina are any better, but wasn’t “JEB” supposed to be more “moderate,” the supposed “smart Bush,” etc? Apparently not.