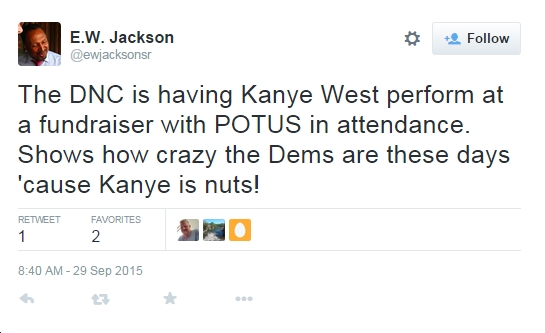 Let me see if I can follow this one: 1) E.W. Jackson, about as extreme and crazy as any politician in America, thinks Kanye West is “nuts;” 2) furthermore, according to E.W. Jackson, the fact that Kanye will be performing at a fundraiser fot the DNC with President Obama in attendance demonstrates “how crazy the Dems are these days;” 3) yet Kanye West is in the middle of a major “bromance” with far-right-wing Republican Presidential candidate Ben Carson (e.g., West called Carson “the most brilliant guy;” when Carson was asked whether he could support Kanye for President in 2020 or whatever, Carson said, “I am certainly willing to give him a chance”); 4) E.W. Jackson appears to be a big fan of Ben Carson as well; 5) so if Democrats are “nuts” for having Kanye at one of their fundraisers, then is Ben Carson also “nuts” for gushing about how much he loves Kanye, and are E.W. Jackson and other Republicans who like Ben Carson also “nuts” by that reasoning?; 6) is your head spinning yet?; 7) mine is.

And yes, Kanye really is attending a DNC fundraiser. I mean, I know it’s all $$$ all the time with political parties, but still…sheesh.