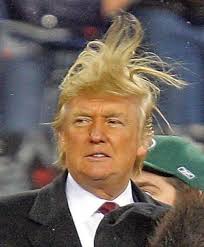 The main truth about America over the past generation has this at its center: A destructive force has taken over the Republican Party. I’ve been trying to understand this force full-time since 2004.

At first I saw it as being rooted in the triumvirate of the Bush II presidency – Bush, Cheney, Rove – but when they left town and the scandalous, destructive behavior continued unabated – now centered in the congressional Republican opposition — I realized that this force had pervaded the political right.

The conduct of the Republicans in Congress, combined with the rise of the Koch-brothers kind of plutocracy and the ongoing whipping up of the base into various forms of fear-and-rage fueled fantasies without any real connection with reality, have clarified the continuing movement of the Republican Party into darkness.

Now comes Donald Trump, and the question arises: what is Trump’s relationship with this dark force on the right?

The answer, I believe, is surprisingly ambiguous. Trump is both feeding the brokenness this force has engendered among the Republican electorate and acting like a wrecking ball on the political party this force has been using as its political instrument.

On the one hand, Trump is completely willing to exploit the craziness that has been cultivated on the right. And more than that, he has no compunction about feeding it.

The bullying and the racism and the belligerence that are perhaps his main poses all encourage the dark passions that this destructive force has been cultivating – since the rise of the likes of Gingrich and Limbaugh — in its followers.

On the other hand, Trump is playing on these feelings in a way that – by exposing them so nakedly, and riding the response to gain his status as the Republican front-runner – is doing serious damage to the Republican Party.

His blatant hostility to Hispanics – and the way so many of the other Republican candidates are clumsily trying to out-Trump Trump on the immigration issue- looks likely to sabotage any hope the Republicans may have had (after the 2012 election) to improve their standing with the substantial Hispanic part of the American electorate. And this, it is widely said, could block any path for a Republican to gain the White House for years to come.

Meanwhile, we’ll see what happens with Trump’s recent foray into the possibility of raising taxes (Oh, the horror!) on hedge-fund billionaires. Perhaps the ability of the Republican elite to keep the masses in line, while serving the 1 percent of the 1 percent, will be undermined.

Trump’s heresy on such issues could undermine the con job the Republicans have put over on their supporters.

And at the same time, Trump is revealing to the rest of the nation the ugliness at the heart of today’s Republican Party.

One might say that Trump is doing a better job, by dramatizing and calling forth that ugliness, in discrediting today’s disgraceful Republican Party than the Democrats have ever roused themselves to do.

It was not complete foolishness for John Fund, writing in National Review, to wonder if Donald Trump is working as a “double agent” for the left.

So the question arises: Who or what is Donald Trump, and what is he trying to accomplish.

I do not believe that Trump is motivated by any such intentions as being a double-agent for the Democrats. But neither is he concerned about damaging the Republican Party, and shifting power away from the force that has taken it over.

Which is why Donald Trump’s relationship with that dark force is most interesting, and represents a new development in the central battle of our times-i.e. over whether constructive or destructive forces will govern America’s future.

My reading of Trump is that he is all about Trump, unhindered by any enduring allegiances, alliances or principles.  (More about Trump as a sociopath in a future piece.) He is an opportunist, who doesn’t mind feeding the destructive force when that gets him what he wants, and he doesn’t mind tearing down the main political arm of that destructive force, when that will get him what he wants.

Trump is truly a wild card, a joker who turns himself into whatever cypher best plays his hand. He is operating by his own rules.

To use a different metaphor, he is an independent operator moving across the political terrain independently of the alignment of the major political armies. He is an army of one.

Had Trump never entered the race, the entire rest of the Republican field would have operated well within the confines of what the force that possesses the Party now allows. But Trump – a skilled opportunist with a well-honed act – has seen his opportunity and he’s taken it, using the force and damaging it at the same time.

Let the chips fall where they may.

Andy Schmookler’s new book is WHAT WE’RE UP AGAINST: The Destructive Force at Work in Our World– and How We Can Defeat It.