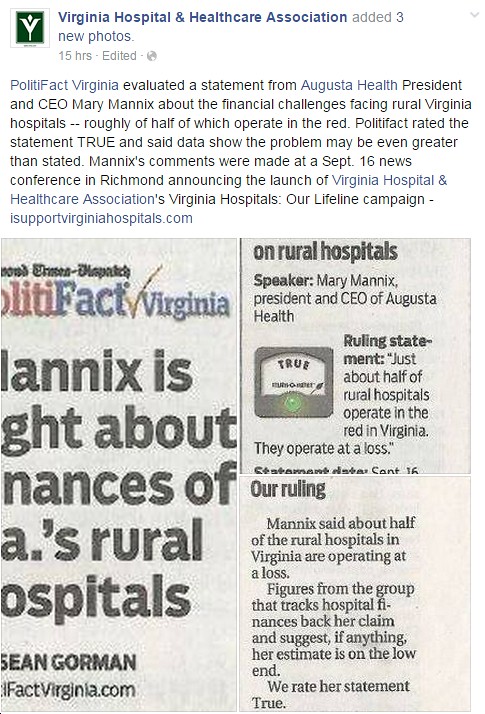 Here are a few national and Virginia news headlines, political and otherwise, for Tuesday, September 22. Also check out that PolitiFact rating of “true” to a statement by the President/CEO of Augusta Health that “about half of rural hospitals operate in the red in Virginia.” To combat this, it’s time for the Virginia General Assembly to allow hospitals to access available funds to offset the financial strain hospitals have been put under due to federal and state policy decisions, and by doing so to allow more Virginians to have access to quality health care.

*Pope Francis arrives Tuesday. Leave your car at home and add extra time to your trip.

*In word and deed, Pope Francis brings message of change to U.S.

*Republicans in Congress Are Going to Hate What Pope Francis Has to Say. Here’s Why. (Give ’em hell, Pope Francis!)

*The GOP’s absurd anti-Pope crusade: The bizarre spectacle of Republicans turning on a religious leader (Frighteningly, today’s GOP has morphed into a bizarre, extreme, outlier party akin to the John Birch Society and a far-right European party like UKIP)

*U.S. sees opportunity for military gains against ISIS in Syria

*Republicans stoke the fire of Islamophobia

*Prejudice on display in the Republican campaign for president

*Activists disrupt Gov. Terry McAuliffe speech to protest pipeline (“We came here today because the governor continues to tout a ‘New Virginia Economy’ based on more fracking and more gas pipelines. But there is nothing new about an economic system based on extraction and exploitation of land, people, and natural resources. How will fracked gas traveling through Virginia in massive pipelines benefit Appalachia? It won’t. It will benefit Dominion and EQT, not Virginians, or anyone else in the Appalachian region.”)

*Democratic lawmakers in Va. and Md. urge passage of a clean budget

*Disturbing propensity for secrecy (“Gov. Terry McAuliffe and Co. have repeatedly understated the legal authority that administration officials possess to fulfill the spirit and the letter of Virginia’s open-records laws. Unfortunately, even the Supreme Court of Virginia appears to be following that lead.”)

*In Virginia, more than 1 in 4 are obese

*Parties in 3rd District case clash over posting of plans (“The parties in the lawsuit that will lead to new boundaries for Virginia’s 3rd Congressional District are now fighting over whether proposed fixes for the district should be made public on a state government website.”)

*Surovell: Time to move past the dispute over state Supreme Court appointment

*Harry Reid to speak at UVa on Saturday

*400 gallons of oil spills; some gets into Dan River (Reminder: when solar “spills” it’s simply known as a sunny day.)