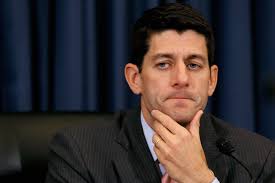 “House Conservatives Support Paul Ryan For Speaker, But Won’t Formally Endorse Him”
(headline just in from Huffington Post) — this should be interesting.

This seems to be less than what Ryan was calling for, or perhaps demanding. It seems to indicate a lower proportion of the members of the so-called “Freedom Caucus” support his becoming Speaker.

It occurred to me that Ryan’s terms, laid out yesterday, might have been intended by him as a way of being able to turn the position down but to have the onus of his refusal — and the resumption of chaos that it implies — fall not on him (doing him political damage in the party) but on the nihilists who have sabotaged Boehner and then McCarthy.

That way, Ryan gets to avoid the Speakership while escaping unscathed.

If it is true that the “conservatives” have fallen short of the kind of support Ryan stipulated that he required, this will give us a quick test of whether my hypothesis is correct.

If Ryan turns the Speakership down for that reason, then that will suggest that the hypothesis — i.e. that he was setting up the nihilists for the blame for his not rescuing the Party in this crisis — will be semi-confirmed.

If he accepts it, then either this support-but-not-endorsement is not sufficiently far from meeting his terms to give him a safe out, or he wasn’t looking for a safe out in the first place.