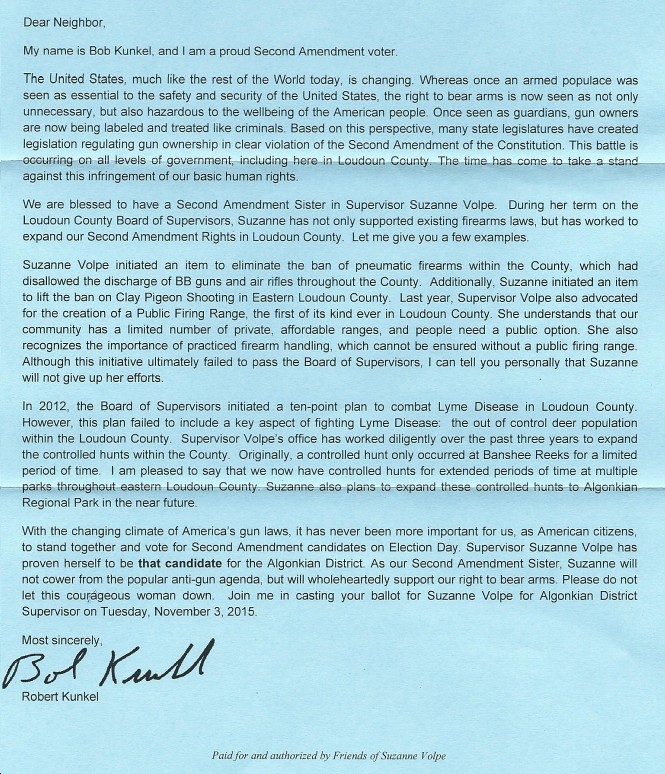 Recently, I wrote about a bizarre mailer by Loudoun County Board of Supervisors member (from the Algonkian District) and staunch, right-wing Republican Suzanne Volpe, basically attacking her fellow Republicans. Now, here are two more from Volpe’s campaign that are, uh, odd.

First, check out the email (click to “embiggen” dealing with guns and mentioning Volpe’s plans to open Algonkian Regional Park to hunting. Note that Algonkian Regional Park is relatively small, contains a golf course and sportsplex, and is adjacent to a middle school and a high school. Also note her pride in eliminating “the ban on pneumatic firearms within the County” (yay! we can now discharge “air rifles throughout the County” – lol!).

I also love the fact that Volpe’s called our “Second Amendment Sister,” a “courageous woman” who “will not cower from the popular anti-gun agenda” (I think they mean the one supported by a majority of NRA members and police chiefs, the one that wants universal background checks for gun purchasers).  Yet somehow, Suzanne Volpe is “courageous” for standing up against background checks, and for hunting in a small park next to a middle school and high school. Hmmm.

Next, check out the “flip” for a letter from a Volpe supporter informing people about Volpe’s strong anti-choice positions and includes the letter writer mentioning she doesn’t know anything about her Democratic opponent, Andrew Resnick, before attacking him as (supposedly) supporting “unrestricted abortion” since he’s a “member of the Board of Directors (sic) of the Democratic Party of Virginia.” Now, what a Loudoun County Supervisor can do about abortion exactly, other than perhaps zoning issues related to women’s health clinics, I’m not sure, given that we live in a strong “Dillon Rule” state. But clearly, Loudoun Republicans are pandering to hot-button issues they think their base cares about, even if those issues make no sense and/or are not within the purview of local-level officials. Finally, perhaps what’s driving this is Volpe and her supporters are getting nervous that she might lose to Andrew Resnick next Tuesday, and are resorting to any attacks they can scrape together to throw out there, hoping something will stick, regardless of relevance or accuracy. 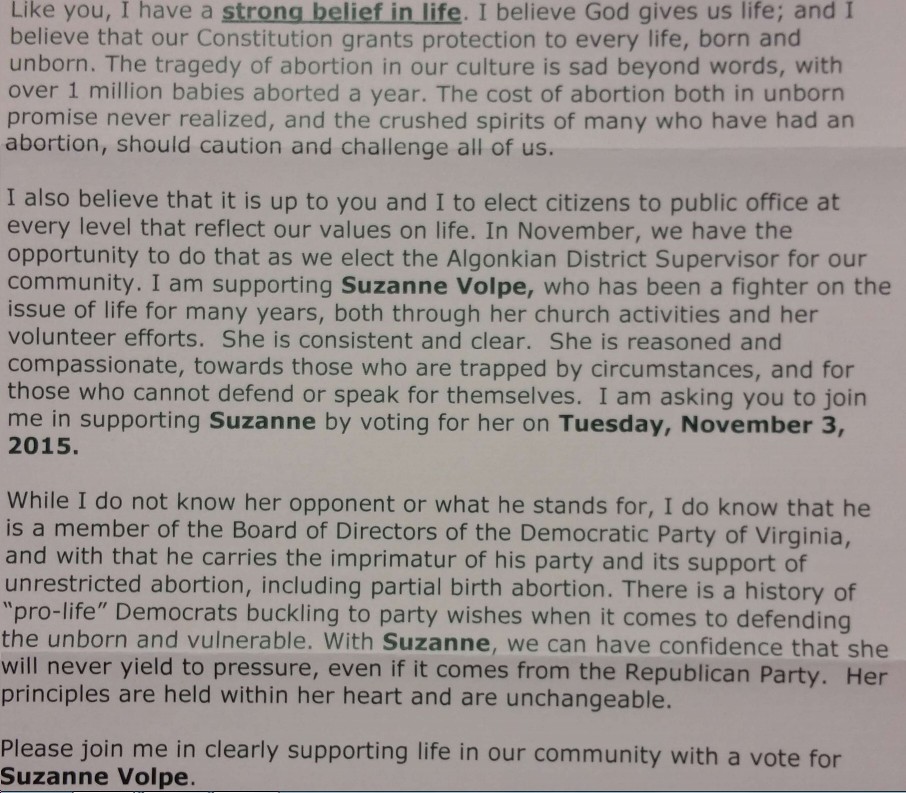