The morning after the first Democratic 2016 presidential debate Tuesday night, I graded all the candidates, giving Hillary Clinton an “A,” Bernie Sanders a “B-,” Martin O’Malley a “C,” Lincoln Chafee a “D-” and Jim Webb an “F.” Well, now NBC is out with a poll which finds that I was very much on the same page as Democratic registered voters (RVs) nationally. As you can see, those  RVs overwhelmingly thought that Hillary Clinton did the “best job in debate” (+53 points), with Sanders next (+30 points), and then a HUGE (or as Donald Trump might say, “YUGE!”) drop to Martin O’Malley (-6 points), Lincoln Chafeee (-21 points) and Jim Webb (-24 points, with nobody thinking he did the best job in the debate but 25% saying he did the “worst job”). 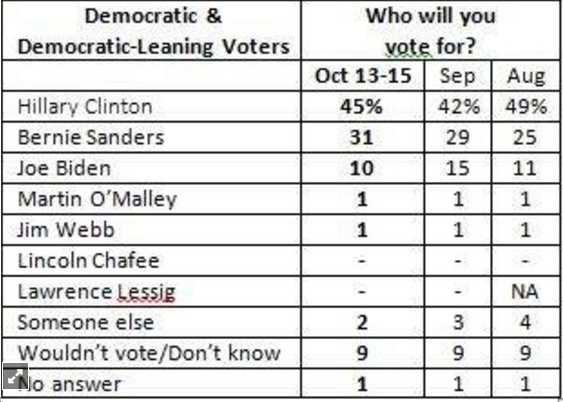 What does this mean, if anything, for the actual Democratic nomination contest? According to this poll, anyway, the main finding is that both Clinton and Sanders went up a couple points, Biden went down 5 points, and O’Malley/Webb/Chafee stayed down close to zero. So…the big question is what Biden does, but given Clinton’s strong performance at the debate, and given these numbers, if he’s listening to his “head” he’ll say “thanks, but no thanks” to this race.

By the way, speaking of Webb, his 3Q15 fundraising report is out – the first time we’ve gotten a glimpse at Webb’s finances – and it’s not impressive.  Overall, Webb raised just under $700,000, compared to $29.4 MILLION for Hillary Clinton and $26.2 MILLION for Bernie Sanders. Webb had a bit over $300,000 “cash on hand” as of the end of the third quarter, about 1% of the $33 MILLION “cash on hand” for Hillary Clinton. As for Martin O’Malley, he raised just under $1.3 million, while Lincoln Chafee raised what The Guardian calls “a laughable $15,457.90 including $4,121 that he gave his own campaign.” The only question for Chafee is what’s more laughable, the pathetic amount of money he raised or the “most bizarre answer of the debate”. LOL

P.S. I agree 100% with Democratic politico, activist and blogger Dante Atkins that “the promotion of useless unscientific frontpage polls by Bernie supporters lowers our cumulative political intelligence, especially when it’s used to peddle conspiracy theories. And that drives me bonkers.” Another thing that drives me bonkers is Jim Webb’s incessant whining  about not getting enough time in the debate (dude, you’re at 1%, I’m amazed Chafee and you were even invited on stage!) and how it was supposedly “rigged.”  Ee gads.