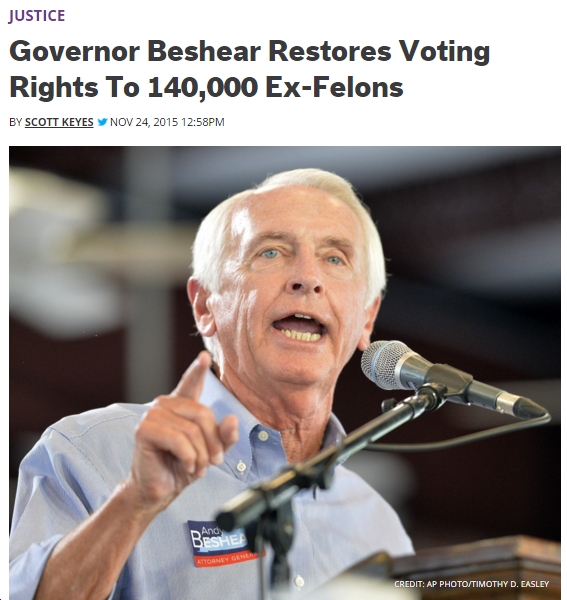 Can someone explain to me why we can’t do what Kentucky Gov. Steve Beshear just did?

In a small handful of states, people convicted of a felony are automatically stripped of their voting rights, even after they’ve finished serving their sentences. Today, Kentucky took a major step to fix that problem.

Outgoing Gov. Steve Beshear (D) signed an executive order on Tuesday to restore voting rights for many of the 180,000 Kentuckians who have been served a felony sentence but remain disenfranchised.

The Brennan Center for Justice estimates that Beshear’s executive order will immediately allow 140,000 Kentuckians to restore their voting rights, and an additional 30,000 will be eligible down the road. The organization praised Beshear’s order as “an incredible breakthrough in the movement to end criminal disenfranchisement policies nationwide.”

The restoration of voting rights does not apply to ex-felons who were convicted of violent crimes, sex crimes, bribery or treason.

…with a stroke of a pen, you can sign an executive order and restore their voting rights and change the history of Virginia forever. Will you do it, and if not why not?


So here we are, six years later, with another Democrat in the Virginia Governor’s mansion, yet STILL without a blanket restoration of non-violent ex-felons’ voting rights. Why? Are Democrats afraid of being labeled “soft on crime” (even though Virginia’s one of only a VERY small number of states which make it so absurdly difficult for ex-felons to get their voting rights back)? Are Democrats afraid of Republicans criticizing them for…what, letting more people vote? Of course, in the first case, Republicans are going to accuse Democrats of that (and everything else under the sun) regardless. On the second point,  the Republicans don’t want more ex-felons (made up disproportionately of poor people and minorities, for utterly disgraceful and unacceptable reasons) voting, as these folks will likely vote heavily Democratic. That’s the same reason why Republicans push to make it more difficult for everyone, not just ex-felons, to vote, using the made-up nonsense about “voter fraud” to try and provide a fig leaf for their blatant voter suppression efforts. Screw that.

Anyway, the bottom line is that restoring peoples’ rights to vote, once they’ve “served their time and paid their debt to society,” should be an absolute no-brainer; it’s the right thing to do on every level. If it gets challenged in court, fine, let the court decide this important issue. As for the politics of it, I don’t see a clear positive or negative for Democrats, and regardless, the morality of restoring people’s voting rights should trump the (nebulous) politics, regardless. So, Gov. McAuliffe, you’ve already done some great work on this subject (along with your Secretary of the Commonwealth, Levar Stoney). Now, can you please follow Gov. Beshear’s lead and issue a blanket restoration of ex-felons’ voting rights. Thank you.