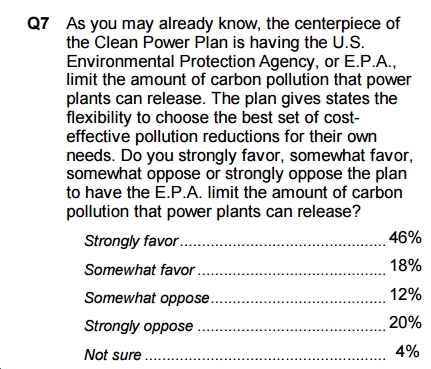 A new poll of Virginia voters by Public Policy Polling confirms what many other polls have shown: that Virginia voters by a large majority (64%-32%) support the EPA’s Clean Power Plan (CPP) to limit the amount of carbon pollution emitted by existing fossil-fuel-fired power plants. Also interesting is that the intensity on this issue is with supporters (46% “strongly favor” the plan) over opponents (just 20% “strongly oppose” it).

What’s weird is that anyone would oppose this plan, as it’s pretty much a no-brainer on every level. Perhaps that opposition is the result of the fossil fuel industry’s disinformation campaign, aimed at convincing Virginians that the CPP will increase their power bills (uh, no) and other supposed (but false) horrors, and picked up uncritically by the lazy, irresponsible corporate media. It also could be that a significant percentage of Republicans oppose the CPP reflexively, simply because it was put out by the evilsocialistcommiewhatever Obama administratoin. I mean, seriously, if the Obama administration announced it was in favor of life, liberty and the pursuit of happiness (which of course it is), right wingers would probably accuse them of being for death, tyranny and misery. Oh wait, they already do that…lol. 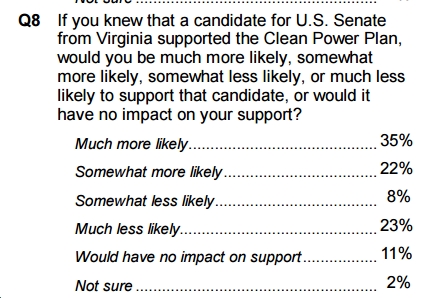 Anyway, one more comment on the polling: by a 57%-34% margin, Virginia voters say they’d be MORE likely (35% say MUCH more likely) to vote for a candidate who supports the CPP. Unfortunately, I doubt this will impact most Republican candidates’ or incumbents’ thinking, since they are mostly in solid-red, gerrymandered-for-incumbent-protection districts, where realistically the ONLY chance guys like Dave Brat, Morgan Griffith, etc. will ever lose is via a primary from their right. Yeah, I know, it’s almost impossible to imagine anyone in America further right than Brat, Griffith, etc, but there you have it.  Finally, add in the fact that a lot of those same Republicans are funded heavily by the fossil fuel industry, and are basically puppets of said industry. Still, it’s good to know that most Virginians “get it” on the need to move rapidly from dirty to clean energy, even if their (Republican) elected officials don’t.