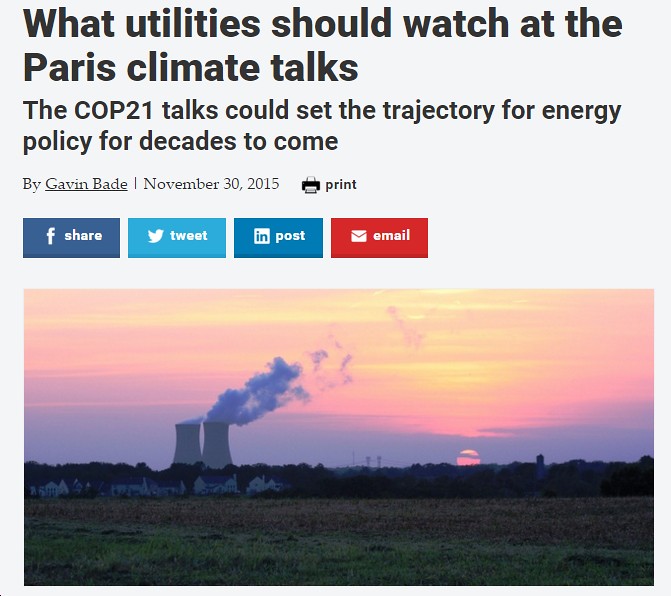 What should utilities like Dominion Virginia Power be taking away from the Paris climate talks? Utility Dive has some thoughts, all of which are highly applicable here in Virginia.

1. “Any deal could have far-reaching consequences on electric utilities – a sector for which the talks hold special significance… analysts say utilities should pay close attention to how world leaders shape deeper decarbonization goals out to midcentury, as those goals will influence their investements today.” In other words, utilities like Dominion Power should not be locking in long-term investments that emit carbon pollution, but should be focusing almost exclusively on energy efficiency, solar, wind and other forms of clean, non-carbon-based energy.

2. According to Rachel Cleetus, lead economist at the Union of Concerned Scientists, although “power companies will likely be prepared in the short term for any emissions goals that come out of Paris,” the longer-term outlook is far less clear. Thus, “A power plant that looks like a good investment today may not be such a lucrative asset in a few decades when analysts expect decarbonization goals to be more ambitious, and that warning applies particularly to American utilities.” Again, the implication here for Dominion Power – and for Gov. Terry McAuliffe – is that their over-the-top enthusiasm for new natural gas infrastructure (e.g., Gov. McAuliffe has absurdly – and falsely – called the proposed Atlantic Coast [natural gas] Pipeline a “game changer”) is wildly off base. Instead of locking us in to a fossil fuel future, even if it’s one that emits less carbon pollution (but more methane, a powerful greenhouse gas!) than coal, it’s utterly unwise, also potentially highly risky as constraints on carbon pollution necessarily get tougher and tougher in coming years.

2a. Amplifying point #2, Cleetus says: “Simply ramping up natural gas is not going to put us on that long term pathway we need to continue to ratchet up ambition in terms of emission reduction…Gas has an important role to play but it has to stay contained. It is a fossil fuel at the end of the day and it does come with carbon emissions and there are leakage issues as well.” Again, proposed new natural gas pipelines, like the Atlantic Coast Pipeline, are the (wildly) wrong way we should be going here in Virginia.

3. What SHOULD Dominion Power and Gov. McAuliffe be focused on? According to Cleetus (and many other energy experts): “Accelerating the shift from fossil fuels to renewables and energy efficiency will be key in the fight to meeting those goals…but so will energy storage, which holds the promise of one day replacing peaker plants. Nuclear generation could also have a role to play in the decarbonized economy, but only if it addresses its current issues with construction delays and cost overruns.” Note that last point, with which I fully agree; namely, that nuclear power COULD be a viable option, but ONLY if it deals with its massive cost overruns and need for huge subsidies by taxpayers. If it does that, great. If not, then new nuclear power simply shouldn’t be built, especially since energy efficiency is so much cheaper, as is onshore wind and utility-scale solar.

So what are Dominion’s current plans, and how do they stack up to the criteria I’ve listed above? According to Dominion’s plans for 2015 to 2020, the company remains wildly off course: $2.4 billion on the Atlantic Coast Pipeline boondoggle; $341 million on the new, natural-gas-fired Brunswick Power Station; $1.3 billion on the new, natural-gas-fired Greensville Power Station; $808 million on the proposed North Anna 3 nuclear unit; and a continuation of Dominion’s top-down model, as evidenced by its continued hostility to rooftop solar power and other “distributed” forms of energy, while spending billions on its traditional transmission infrastructure. In other words, #FAIL all around, with the exception of the far-from-sufficient investments Dominion plans to make in utility-scale solar ($700 million) and offshore wind ($379 million). How about taking the billions for new natural gas infrastructure and putting it ALL into: a) energy efficiency; b) utility-scale solar; c) onshore and offshore wind; and d) more distributed power solutions? Oh, right, because Dominion has nobody pushing it to do any of that, and is sitting pretty right now as a state-protected monopoly, one that uses our utility payments to buy up our legislature. Sweet deal, huh?