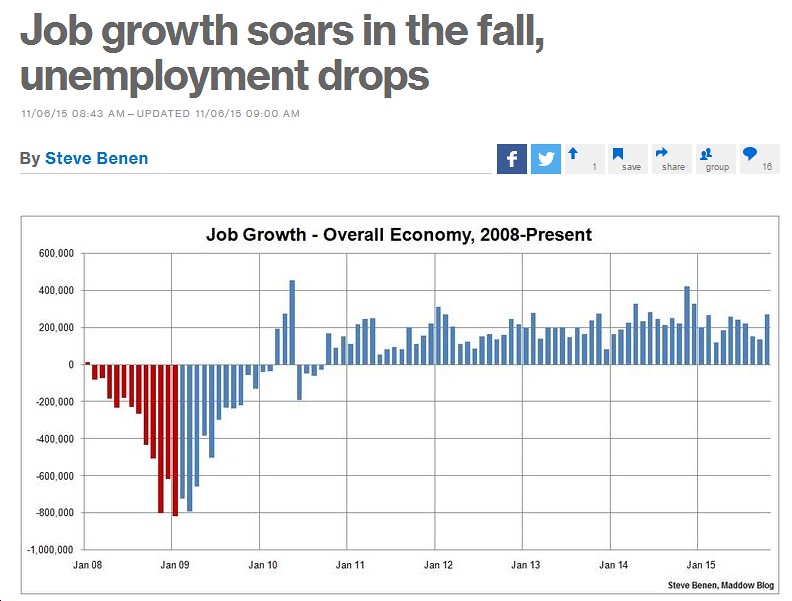 If you’ve been paying any attention at all to the 2016 Republican presidential race, and if you’ve taken anything these clowns have said seriously, you might be ready to slit your wrists, because according to Trump/Carson/Fiorina/etc., America is (take your pick): a) an economic wasteland; b) a weak and pitiful former superpower; c) “crippled” (as in the title of Trump’s new book/screed, “Crippled America”); d) in desperate need of fixing/saving/resurrection; e) about to fall into (or already having fallen into) Nazi-like tyranny; f) all of the above; g) think of your own insane dystopia and that’s America these days.

Of course, there’s a tiny grain of truth to this negativity, gnashing of teeth, doom-and-gloomism and hysteria: in fact, America DOES face challenges (as we always have), there ARE problems in the world (as there always have been), and not EVERYTHING is going perfectly well (for instance, global warming, which many of the Republican 2016 crowd denies and/or would make worse; income inequality, which many/all of the Republican 2016 crowd doesn’t care about and/or would make worse; turmoil in the Middle East, which is largely the result of the last Republican administration’s utterly failed attempts to create a new Middle East).

But other than the tiny grain of truth — combined with the fact that Republican policies have exacerbated most of these problems and would make them much worse with a Republican president in 2017 — the Republican presidential candidates’ political narrative is basically 180-degrees wrong. Let us count the ways.

1. As the graph by Steve Benen shows, we were hemorrhaging jobs when Barack Obama took over from Bush/Cheney in January 2009. Within months, President Obama and the Democrats turned that situation around, to the point that – as Steve Benen notes – “October was the 61st consecutive month of positive job growth – the best stretch since 1939 – and the 68th consecutive month in which we’ve seen private-sector job growth, which is the longest on record.” That’s right: “best stretch since 1939!” So much for “crippled” America; in fact, our economy is the envy of the world.

2. The stock market, meanwhile, has soared under President Obama, not surprising given that Democrats historically have been better for the stock market than Republicans. Still, it would be nice if 2016 Republican candidates would express a bit of gratitude, especially since many of them are wealthy, with large stock portfolios, and presumably have made out like bandits under the “socialist” (hahahaha – not!) Obama.

3. As mentioned above, income inequality is a major problem, but that started decades ago, with the “great” Ronald Reagan contributing a lot to it through his brain-dead “supply-side/trickle-down” economic policies, his busting of unions/labor power, and his belief that corporations could do no wrong. Under the Bush/Cheney disaster, all of that got even worse, and the Bush/Cheney Great Recession certainly didn’t help matters. Of course, you won’t be hearing any of that reality from 2016 Republican presidential contenders. On the other hand, what else would you expect from people like Ben Carson, who have…let’s just say “interesting” theories about all kinds of things, from the pyramids to the rise of the Nazis to…well, everything pretty much?

4. Finally, with regard to foreign policy, there’s no doubt that there are problems in the world, as there always have been, but you can be sure that the 2016 Republican narrative won’t mention how the last Republican administration played a huge role in creating them, and how the current Democratic administration has now spent 7 years digging America out of the messes Bush, Cheney, Rumsfeld, etc. made.  A great example is Iran, which was massively accelerating its nuclear weapons program under those “tough guys” Bush and Cheney. Today, under the supposedly “weak” Obama, guess what? That’s right, Iran has begun dismantling centrifuges, in line with the nuclear deal negotiated by President Obama’s administration. Amazing how that works, huh?

Bottom line: you can buy into the wildly wrong, dystopian, hysterical Republican narrative about “Crippled America” and all that crap. Or, you can do what Americans have always done: build on our strengths, fix our problems, and make our society a true “shining city on a hill” that is the envy of the world. One thing’s for sure — you won’t get that from ANY of the wackos running for the 2016 Republcian presidential nomination.