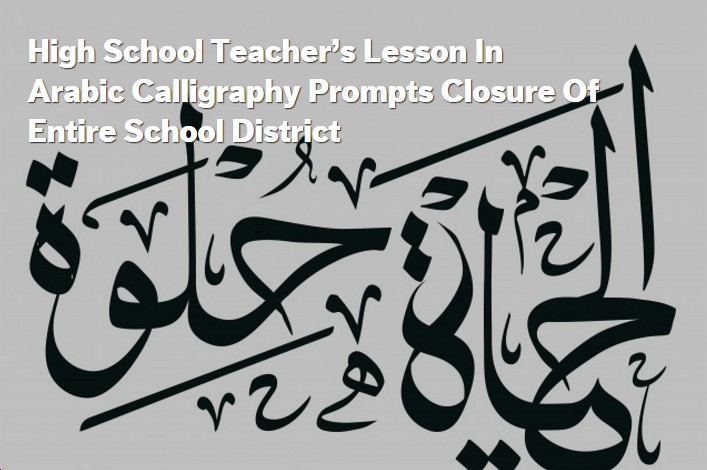 You’ve undoubtedly heard by now of this story, in which “[a] high school geography teacher in rural Augusta County asked students to try their hand at writing the shahada, an Islamic declaration of faith, in Arabic calligraphy,” leading to “a sudden influx of outrage from around the country — including angry emails, phone calls and threats to put the teacher’s head on a stake” and the school district opting to “close rather than risk disruption or violence.”

Disgusting, I know. Anyway, here’s some reaction, from a Muslim (Atif Qarni) and a person (me) who was raised Jewish but has basically been an agnostic or atheist when it comes to religion for many years. Bolding added by me for emphasis.

First, Atif Qarni on Facebook a few minutes ago:

A teacher came under fire because in a world geography class she was teaching kids different types of calligraphy (Sanskrit, Arabic etc.) The parents objected to the Arabic one because of its Islamic background.

Just yesterday my school was in the Christmas spirit. Our 8th grade Choir was performing holiday songs for us in a school assembly. Over a dozen kids in our Chorus are Muslim kids whose parents immigrated from places like Pakistan, India, Syria, Jordan, Ghana etc. These kids were singing songs like Merry Christmas. I don’t know of a single kid or their family who had issue with this.

My wife and kids each year put up a Christmas tree and decorate our house because they really enjoy it. At no point any of us have felt that we are any less Muslim. My family is equally engaged when Ramadan comes around.

It is extremely disappointing to see so many families in Virginia turn on their Muslim neighbors. When you force an entire school division to shut down due to your ignorance you are alienating friends like the neighborhood family doctor who most likely is Muslim or a local seven eleven worker who you need to see when you are out of milk and other grocery stores may not be open on odd hours, or a Muslim teacher who inspires all kids to be great.

When I was a Jewish kid growing up, I sang in the public school chorus and almost every year sang lyrics like “Christ the Savior is born!,” “Christ, the everlasting Lord,” “Jesus, our Emmanuel,” “O come, let us adore Him, Christ the Lord,” “King of kings, and Lord of lords…And He shall reign forever and ever,” etc, etc. Sure, the lyrics and beliefs in these songs were not at all in agreement what I was being taught in Hebrew School, Sunday School, etc, but that’s the way it was back then (and still is in many places), so I mostly focused on the music (much of which is beautiful and fun to sing!) and basically ignored the meaning of the lyrics or simply looked at them as those of another religion that wasn’t mine, but of course was worthy of respect (just was Judaism and Islam are worthy of respect).

I also studied Arabic for several years, and wouldn’t have had the least problem with using the Koran (or whatever Arabic text) to help learn that beautiful, complex language. Again, I’m not Muslim, but why should I feel threatened by learning about another religion, another culture, etc? I truly don’t get how insecure people must feel to lash out the way they’re doing, as in this Augusta County case (or with people like EW Jackson, Ted Cruz, etc.). It’s even more bizarre when you consider that Muslims and Jews are a tiny minority in this country, while Christians make up the huge majority…