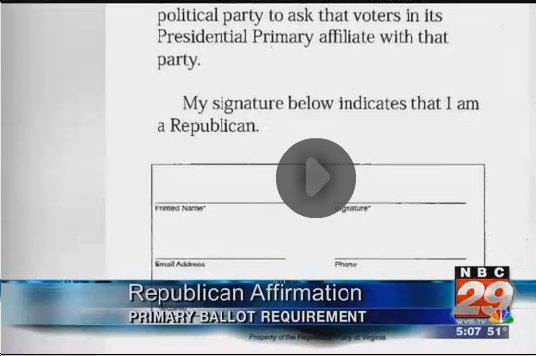 By Paul Goldman (note: Goldman served as Chair of the Democratic Party of Virginia during the governorship of Doug Wilder)

Can the General Assembly of Virginia delegate to a political party the right to require the loyalty oath in question for a presidential primary election even it must be approved the VA Dept of Elections?

Given the specific loyalty oath at issue, there is a legitimate constitutional and state law issue. The fact a state election agency gave its okay doesn’t end the legitimate legal inquiry given the important voter rights at issue which have to be balanced with state party rights.

Virginia, by law, has chosen not to require political party registration, holds open primaries/caucuses and has chosen to grant to political parties the right to hold a presidential primary paid for by the voters.

The law, Section 24.2-545, also discusses the right of the parties to impose requirements for participation in the primary process. According to a Supreme Court decision directly addressing the VA election scheme, the actions of the VA GOP relative to imposing any such requirements is covered by the first amendment to the federal constitution, VA’s own first amendment protections to citizens, and the Voting Rights Act of 1965 as amended.

In my view, the oath chosen by the GOP for 2016 raises serious legal questions as to whether it is permissible to allow a political party to impose such a requirement, even though it has been approved by the VA Department of Elections as an administrative matter.

I think Mr. Trump would have a legitimate legal basis for challenging the matter in state or federal court.

I think he would have a legitimate chance of winning any suit.

It is a suit which would prove useful.

In 2013, after the debacle in the GOP presidential primary, I worked to get then Attorney General Cuccinelli to work on a bipartisan basis with myself and others to fix certain problems with the state’s presidential primary laws. We worked hard and got several new laws passed.

They eliminated the 2012 problems and also addressed other glitches in state election law.

Trump has a legitimate beef here legally. As for the politics, well it seems a bonehead move politically for the GOP, but I have written that before when they last went this route, only later to agree with me and drop it.