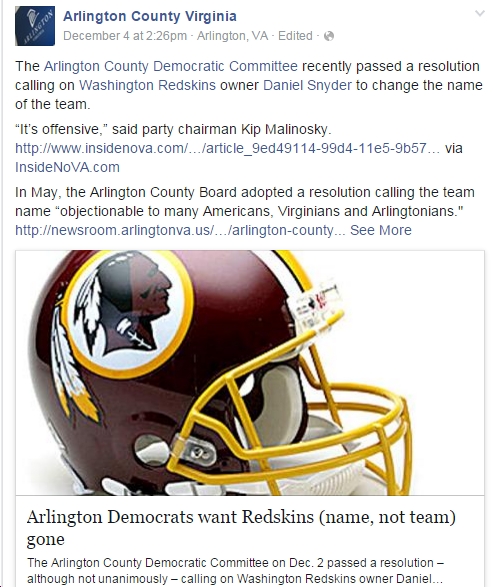 The other day, I noted approvingly that the Arlington County Democratic Committee (ACDC) had passed a resolution calling on the Washington NFL team to change its name, “citing the offensive and derogatory nature of the racist slur and the negative impact it has on the image of our region.” Now, I happen to strongly agree with ACDC on this issue, and I hope that other Democratic committees will adopt similar resolutions and that the team will change the name.

Having said all that,  I also have to largely agree with a former employee of said Washington NFL team, Ben Tribbett, who responded to this Arlington County Board’s official Facebook page by writing, “This is bizarre to see such an inappropriate use of a government Facebook account.”

Similarly, I’d dislike it if the Republican-majority Loudoun County or Prince William County Boards linked to their local Republican committees’ resolutions on abortion or guns or whatever. In those cases, I’d likely disagree with the resolutions. In this case, I agree with it. But either way, the County Board should not be giving the impression that it’s a mouthpiece for any political party, particularoly since everyone’s tax dollars — Democrats, Republicans, Greens, Independents, etc. – fund the county government, including its media budget. If the County wants to weigh in on this, or any other, issue, it should do so by passing its own resolutions, using its own voice, etc.