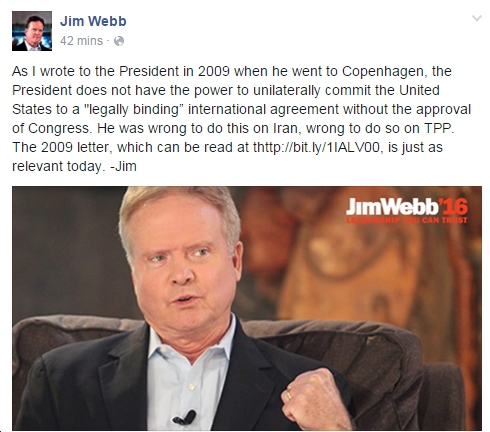 Jim Webb is just painful to watch at this point. Actually, he’s been painful to watch for years, but just when you hope he’s ridden off into the sunset, he reappears with another wrongheaded remark. In this case, it’s regarding the historic, not to mention crucial to our planet’s future, climate agreement reached in Paris by nearly 200 nations, including ours.

In Webb’s (factually incorrect) view, President Obama does not have “the power to unilaterally commit the United States to a ‘legally binding’ international agreement without the approval of Congress.” In fact, he most certainly does. But don’t believe me, let’s hear what Bill Purvis, “former State Department treaty lawyer under Presidents Bill Clinton and George W. Bush,” has to say on the subject.

US law allows its president to approve some international agreements without the Senate. These are called “executive agreements” and they are exceptionally common: the United States enters into about 94% of its international agreements this way. The Yalta Agreement in 1945 that helped define the post-second world war order and the Paris Peace Accords in 1973 that ended the war in Vietnam are examples of this.

The decision to move ahead without Congressional approval does have certain implications. Presidents generally only have authority to approve executive agreements without Congress when those agreements can be fully implemented under existing law. Current US law does not explicitly authorize the president to manage the US economy to achieve a national economy-wide climate target. But it does allow the president to bind the nation to international diplomatic processes.

That means US negotiators can push in Paris for an agreement that would obligate every nation to have internationally binding obligations to develop climate action plans, report transparently on progress and revise those plans regularly, all without needing new action by Congress.

OK, don’t believe him either? How about this analysis by John Bellinger III, who served in the George W. Bush administration as legal advisor for the U.S. State Department and National Security Council?

…Paris could still yield legally binding provisions short of a treaty, says CFR Adjunct Senior Fellow John B. Bellinger III. “Because the U.S. is already party to the UNFCCC, which requires the U.S. to take steps to mitigate climate change, and the executive branch has existing authority to limit carbon emissions under the Clean Air Act,” he says, “the administration likely believes it has a good domestic legal basis to agree to certain legally binding climate change provisions.”

In the case of a Paris agreement, the Obama administration knows that not only will the Senate not approve the agreement as a treaty, but that the present Congress will not enact any implementing legislation requiring the United States to limit carbon emissions or provide international financial contributions to mitigate climate change. However, under the Clean Air Act passed by Congress in 1973 and amended in 1990, the Environmental Protection Agency already has substantial authority to issue regulations to limit carbon emissions.

Although the Obama administration could not obligate the United States to achieve specific emissions targets without the Senate’s advice and consent, it could commit to take more general, but unspecified, actions to limit carbon emissions. The administration could then implement those general commitments through the authority delegated to the EPA by Congress in the Clean Air Act.

So yeah, Jim Webb is wrong on the legal and constitutional issues here. The more troubling question is why Webb has gone so kamikaze anti-environmental in recent years, with his slobbering over the filthy coal industry (the same one which he harshly disparaged in his book, “Born Fighting”) and other anti-environmental statements and votes. It would be fascinating to know what changed Webb’s mind from arguing that the coal industry had “rape[d]” Appalachia (“a sundering of their own earth as the mining companies ripped apart their way of life, so that after a time the only option was to go down into the hole and bring the Man his coal, or starve”)?  Webb was right in “Born Fighting,” but today he’s done a 180 and is apparently going to defend the dying coal industry to its last, wheezing gasp. Sad.