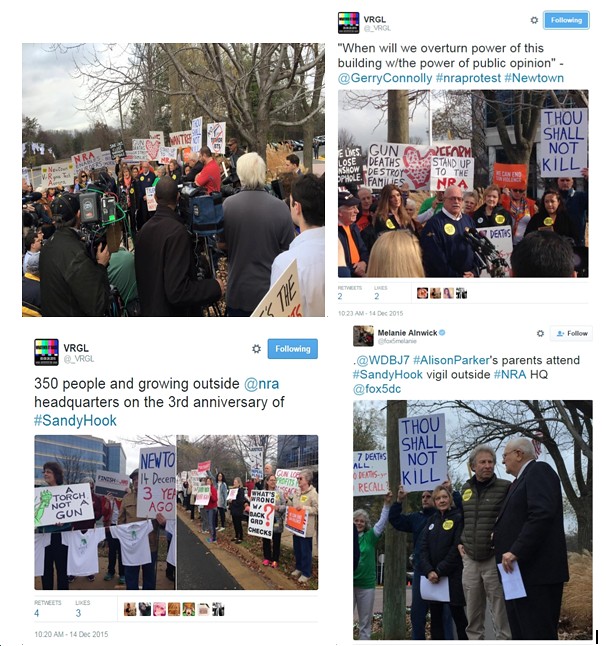 Here are some photos (click to “embiggen”) from a protest and vigil this morning at NRA Headquarters in Fairfax, Virginia, organized by the Herndon-Reston Alliance, Concerned Citizens Against Gun Violence and the Universalist Unitarian Church of Fairfax.

As the Coalition to Stop Gun Violence explains, this is “the third anniversary of the horrific mass shooting at Sandy Hook Elementary School which took the lives of 20 children and six adults,” and since January 2013, “protests have been organized on the 14th of every month at NRA HQ,” with protesters carrying “signs and display t-shirts with the names and ages of victims of gun violence,” the purpose being “to remind the NRA they stand in total opposition to the gun lobby’s campaign for unfettered access to firearms.” Speakers this morning include Rep. Gerry Connolly; Del. Eileen Filler-Corn; Andy and Barbara Parker, whose daughter Alison was murdered on live television this summer in Roanoke, Virginia; and others.

Bottom line: it’s LONG past time to end the scourge of gun violence in America. Unfortunately, thanks to a right-wing Supreme Court combined with the blood money and political power of the gun lobby, the United States remains an outlier among all other nations in the world, certainly ones that consider themselves “civilized.” As for the NRA, those people have blood on their hands — see articles like Since Sandy Hook, an American Kid Has Died by a Gun Every Other Day and Mass shootings since Sandy Hook, in one map and Neil deGrasse Tyson’s tweet (“1.4 Million: Americans who died in all Wars fought since 1776. 1.4 Million: Americans who died via household Guns since 1968”) for more on that subject. The question is, when will the huge “silent majority” of Americans who support tougher gun laws stop being silent? And when will politicians tell the NRA to take their blood money and f*** off?