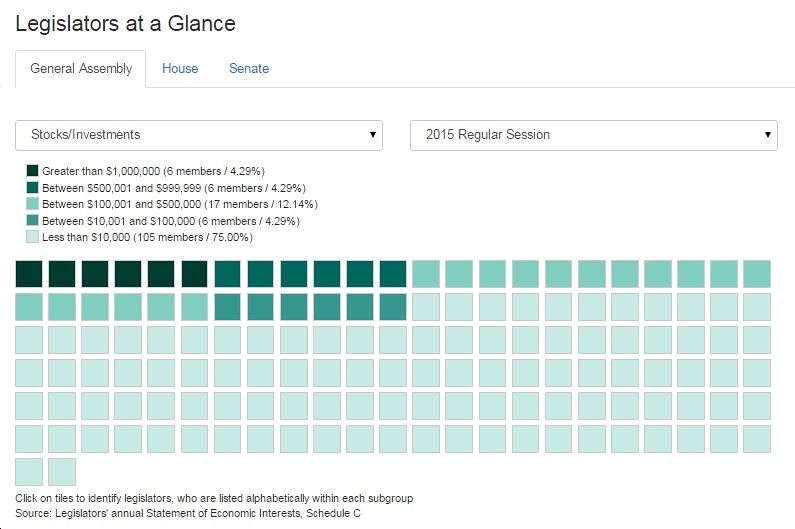 UPDATE 6:24 PM: After assuring me multiple times that their numbers were accurately presented on their website, the VPAP folks now tell me that they actually were wrong. They’ve apologized and stated that they definitely didn’t “live up to our own standards” on this one. Uhhhh…alrighty then. Anyway, given the changes, my analysis of course will change, especially since VPAP’s new/improved/corrected (let’s hope!) numbers now show just 22% of General Assembly members under $10k in stocks/investments, with 16% between $10k and $100k, 38% between $100k and $500k, 11% between $500k and $999,999; and 13% over $1  million. What to make of this? I still think Virginia’s got a horrendously bad system for ethics, that “disclosure” is not even close to sufficient as a counter to all kinds of shenanigans, and basically that this entire system reeks to high heaven. Other than that, it makes a lot more sense to see that the well-to-do members of our General Assembly actually admit to having significant stocks and investments. Still, none of this leaves me with a warm/fuzzy feeling…

You’re probably aware that in Virginia, almost anything goes when it comes to financing political candidates and elected officials. That includes essentially unlimited donations even from individuals and corporations (e.g., Dominion Power) with pending and/or current business before the very elected officials they’re donating money to! That, in turn, is the very defintion of “legalized corruption.”

The one “check” in Virginia’s pathetic “ethics” system regarding money in politics is supposed to be “full disclosure”/”transparency,” particularly on the Virginia Public Access Project (VPAP) website. Of course, the fact is that only a miniscule percentage of Virginians probably even know that VPAP exists, let alone have ever used it. In addition, VPAP only reports the information it’s given; it has no investigatory, let alone enforcement, powers to speak of. But even with regard to reporting the information it’s given, there’s the good old “garbage in/garbage out” problem: if the information VPAP receives is utter crap, then the information they display on their website will be…yep, you guessed, it utter crap as well!

What on earth is going on here? I’ve asked around, and as far as I can determine it’s probably a combination of things. First off, the requirements in Schedule C (“Statement of Economic Interests: Securities”) are a combination of opaque, inscrutable and utterly bizarre. Thus, for instance:

WTF? Does any of this make any sense to anyone? Probably not, which leads to my first theory: that there’s simply no common understanding regarding what needs to be disclosed and what doesn’t. Which means that it’s a member-by-member thing as to what they decide to report or not to report. Second, my guess is that since this is so convoluted, many members report the bare minimum they think they have to report. That’s how you end up with bizarre reports like Sen. Dick Saslaw supposedly only having “less than $10,000” in stocks and investments to his name. Or that this group of lawyers and businesspeople can have so few assets? What are they, the worst lawyers and businesspeople in human  history? Or are they simply not reporting everything they own? Because if you seriously believe that 75% of these folks have under $10,000 in stocks and invstments, well…I’ve got some great investments to sell you! LOL

By the way, this system isn’t just flawed, it could be even more problematic than that. According to white collar defense attorney David Benowitz, a founding partner Price Benowitz LLP: “The lack of consensus regarding which types of campaign funds must be reported in Virginia could almost certainly give rise to legal issues or potential criminal liability for incumbents and candidates alike. Considering the highly-charged nature of public elections, this is a situation that bears monitoring as we approach next year’s election season.”