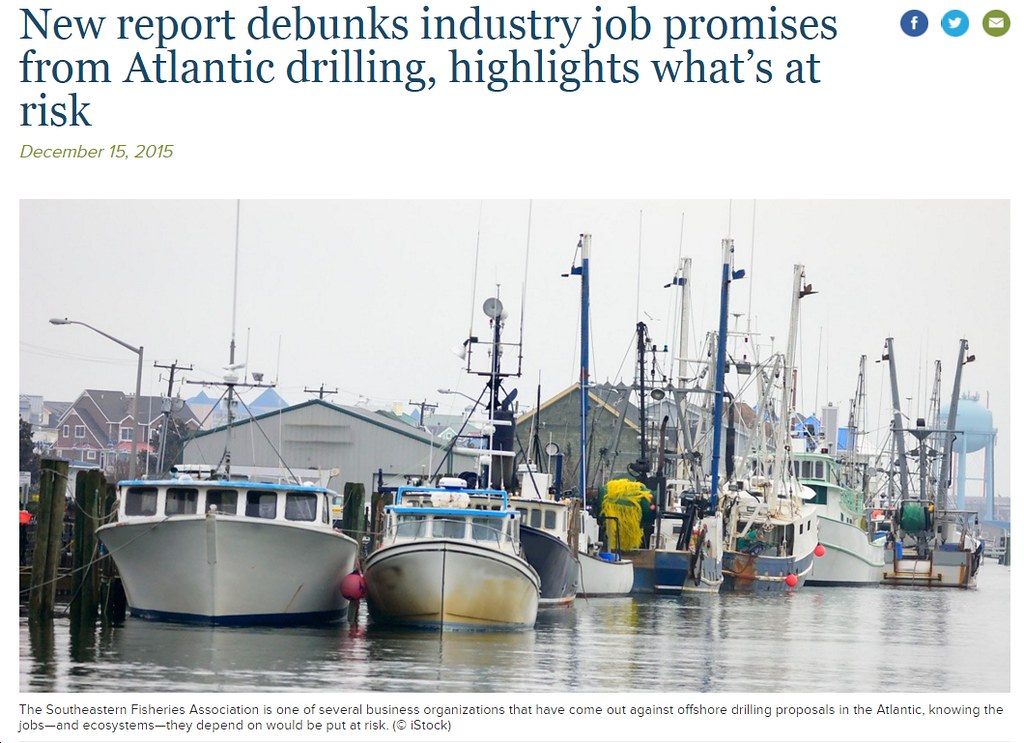 You might not remember the 2013 report, “The Economic Benefits of Increasing U.S. Access to Offshore Oil and Natural Gas Resources in the Atlantic?”, but the oil industry (for which that report was prepared; note that it’s hosted on the American Petroleum Institute’s website!) certainly does. In fact, as the Virginian-Pilot points out, that oil industry “study” (in quotes because seriously? does anyone think a “study” by the very same industry whose interests it serves has any credibility whatsoever?!?), “has often been cited by supporters of an Obama administration plan to open much of the Atlantic coast to offshore drilling,” claiming that “states along the coastline, including Virginia, would share in the creation of as many as 280,000 new jobs and stand to gain tens of billions of dollars in leasing revenue.”

Again, if you believe “studies” about the benefits of oil drilling BY THE OIL INDUSTRY (or about the supposed beneifts of coal mining by the coal industry or whatever), then you might also buy that old line about the word “gullible” not being in the dictionary.  LOL Seriously, though, I’m glad to see there’s now a formal demolition of that piece of oil sludge, in the form of this study, “The Economic Effects of
Outer Continental Shelf Oil and Gas Exploration and Development in the South Atlantic Region: Issues and Assessment.” Oh, and before anyone runs off with the crazy false equivalencies: no, there’s no comparison between a “study” by the extreme lucrative, for-profit fossil fuel industry on the one hand; and the non-profit, utterly non-lucrative, underfunded environmental advocacy community. And really, anyone who draws such a false equivalency is just throwing out red herrings to distract from how morally compromised the fossil fuel industry and its shills are.

With that, here are a few key findings from the new study, by the Middlebury Instititute of International Studies at Monterey for the Southern Environmental Law Center. Note that when you read “Quest,” you should substitute the words “American Petroleum Institute” or “API,” since that’s much more to the point.

In short, the API/Quest “study” was wildly flawed, basically just self-serving propaganda, and the fact that anyone – news media, politicians, whoever – bought it does not reflect well on any of those folks. The lesson here? Any time you see a “study,” op-ed, blog post, whatever by an wealthy, powerful industry (or the flacks that sever that industry’s interests), the best bet is to ignore it completely. I mean, what next, a “study” paid for by Donald Trump which finds that Donald Trump would be the greatest president ever? A “study” by a major polluter which shockingly finds that relaxing or even eliminating regulations on said polluter will lead to all kinds of great things for the world? Those fall into the same category as the now-debunked “study” by the oil industry finding that offshore oil drilling in Virginia would be a great thing.  #FAIL