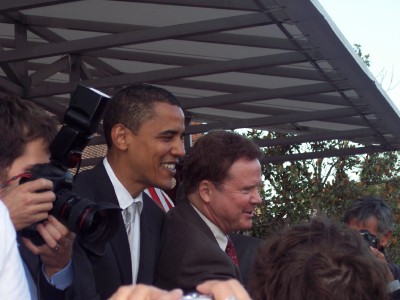 by Kindler, Lowell and the rest of the Blue Virginia crew

We the bloggers and progressive activists who helped Jim Webb launch his political career, do hereby and henceforth definitively disown the dude.

Once upon a time, a blog named Raising Kaine – predecessor to this one – established to advance progressive politics and win elections across the Commonwealth, was searching for a viable candidate to knock off right-wing U.S. Senator George Allen. This was in 2005, when the Bush administration was plunging the country off a cliff with the disastrous war in Iraq and its tragically incompetent response to Hurricane Katrina.

And we found a fascinating prospect – a “Born Fighting,” Scots-Irish war hero, a former Navy Secretary (in the Reagan Administration, no less) and an Emmy Award-winning author who combined a rural, working class past with a deep concern for growing income inequality in this country, libertarian(ish) views on social issues, and fierce opposition to the Iraq War. Jim Webb seemed the perfect man for the moment, custom-made for a purple state slowly evolving from a sleepy Southern past to a 21st-century future with dynamic urban centers.

Around Christmas 2005, Lowell and two other progressive activists (Lee Diamond and Josh Chernila) approached Webb about running, and found him seriously considering it. After Webb threw his hat in the ring, Raising Kaine and hundreds of Virginia netroots activists (who Webb came to call his “ragtag army”) tirelessly supported him – with volunteer hours, financial support, etc. – first against hapless Democratic opponent Harris Miller, and then against Allen. Some of us even went to work for his campaign, helping to guide him through what many of us ultimately saw as a miraculous victory over Allen – and in the process, tipping the U.S. Senate to Democratic control.

Webb started his Senate career strong, giving a searing Democratic response to President Bush’s State of the Union address in January 2007, and leading opposition to the Iraq War. Webb sponsored a successful new GI Bill, decried economic inequality and spoke about the need for prison reform.

Unfortunately, a few years into his term, Webb’s ardor seemed to fizzle. He started to shrink from the scene, spoke out for the coal industry he had once condemned, and ultimately did little to back up his stirring rhetoric on economic injustice. He quit after one term, and temporarily vanished after that.

If Webb had simply retired at that point, or returned to his successful writing career, it would be hard to criticize him. But then, inexplicably, the man who couldn’t bear to be in the Senate for more than one term launched a quixotic, head-scratching campaign for president.
His motivations for running remain a mystery, but it’s hard to see his campaign as more than an ego-driven quest for attention. His appearance at the first Democratic debate, best remembered for his grouchy complaints about not getting enough air time, made him such a laughing stock as to lead him to drop out of the primary campaign. Subsequent reports revealed that he had diverted a substantial portion of his campaign funds to his wife and daughter. Troubling and disappointing.

Now, as Webb contemplates an independent run, he only threatens to make a bigger fool of himself. More and more, Webb seems to drift back to his conservative past, e.g., trashing Obamacare and supporting corporate tax cuts. While he is right that Democrats would benefit from attracting more white working class voters, he does not provide constructive ideas for how to wean this demographic off of the steady diet of false right-wing media memes, misdirected anger and crazy conspiracy theories, for which so many in the white, working class have sadly fallen.

The final straw for us has been Webb’s absurd, false and unfair attacks on Obama and the Clintons – people for whom he has shown little respect or loyalty, even though both Barack Obama and Hillary Clinton campaigned for him in 2006. Most recently, Webb distorted a perfectly reasonable and accurate quote from the president that “blue-collar men have had a lot of trouble in this new economy, where they are no longer getting the same bargain that they got when they were going to a factory and able to support their families on a single paycheck…” Webb claimed, bizarrely, that “[Obama’s] comments degrading the working class by asserting that they cannot adjust to change, and calling factory work a ‘bargain’, are examples of the left’s doing all it can to isolate that demographic group as idiosyncratic.” Huh? How on earth did President Obama say anything false, let alone “degrade” to the working class? What in god’s name is Webb talking about?!?

Look; Jim Webb was indeed the right man in the right place as Virginia’s Democratic U.S. Senate candidate in 2006. But those days are long, long gone. Today, Webb sadly continues his drift into irrelevance, ideological incoherence, anger, vitriol and even Fox “News”-style craziness. So, while we all wish Webb a happy and well-earned retirement, at this point we have no choice than to completely disown and disavow the guy. Let’s just hope that Webb chooses to start his retirement ASAP, rather than continue to tarnish his once-great legacy by continuing to embarrass himself and others.