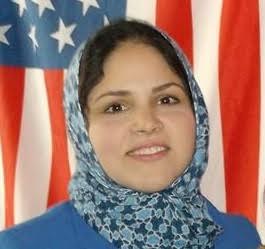 The following guest post is by Fatima Pashaei, who lives in Manassas, Virginia with her husband, U.S. Marine combat veteran Atif Qarni, and their two sons, Zane and Saber

I was born and raised in the United States in a Muslim household. My siblings and I attended Muslim school until 8th grade and all of the women in our house wore the hijab (Islamic headscarf).

For many religious Muslims, wearing the hijab is viewed as a rite of passage into womanhood. As a precocious young girl, I couldn’t wait to grow up, so I began wearing my headscarf at 10 years old, at the same time as my 12 year old sister.

As a 34 year old, I continue to wear the headscarf even though the rest of my female family members have abandoned the practice.

I recognize that every Muslim woman’s experience with the hijab is not a positive one. Individual histories and personal narratives are complicated, lending for varied attitudes and feelings about the practice. One of my sisters described wearing the scarf as donning a “fat suit” — subjecting one’s self to unnecessary ridicule and attention. Another sister claimed that people were more friendly and treated her better when she wasn’t wearing her scarf. Each sister had a different reason for discontinuing the practice and I wholly supported their decisions. A woman’s sense of agency and self-worth, Muslim or not, should never be discounted.

For someone like myself, who is a product of a white American mother and a Middle Eastern father, I am fully aware that the hijab is the only thing that makes me obviously Muslim. Without the scarf on my head, I easily pass for “white,” as my sisters regularly do.

By wearing the hijab, I choose to openly identify myself as a member of the Muslim community. For me, the hijab is a symbol of pride, not punishment.

Wearing the hijab labels me as an “other” in society and strengthens my feeling of solidarity with other marginalized groups. Specifically, it has made me more sympathetic to the struggles of Blacks, Hispanics, and the LGBT community.

Recently, I came to the realization that Muslims in America are not being discriminated against by Blacks, Hispanics, or other marginalized groups. The “problem” with Muslims is largely a white American issue.

I grew up in a predominantly black neighborhood in Washington, DC. In all of the years that I lived in DC, there was not a single instance where I was blatantly discriminated against or mistreated because I wore a scarf.

Sadly, I no longer live in an insulated minority community. I live with my husband and two children in a majority white town of Manassas, Virginia. Our neighbors fly confederate flags and my children go to school with their children. Despite the growing diversity in Virginia, anti-immigrant and anti-Muslim sentiment abounds. Given the size of the rally that gathered for Trump in Manassas, many faces of which my children recognized from school, I cannot help but think that Virginia is going to be a battleground state in 2016 — not just for Democrats and Republicans — but for American values and the extent to which American Muslims are viewed an integral part of society.

In the last year, Islamophobia has reared its ugly head in the United States and average Muslims like myself are now easy and open targets for discrimination. In the last year, I have had several unpleasant confrontations with white Americans. I have been refused services at my local DMV and by a nurse practitioner in a medical office. When my husband and I traveled to New York City to celebrate my birthday, the concierge at our hotel told us that no rooms were available for us to check-in. We sat for approximately 30 minutes in the lobby and watched as several other families were allowed speedy check-in. After our long wait, we were assigned to room 911.

Institutionalized racism in America is real. It is a struggle that Blacks have been dealing with for hundreds of years and continue to fight today, as evident in the Black Lives Matter movement.

Will this same reality hold true for Muslims in America? I certainly hope not, but history seems to indicate otherwise.

This realization leaves my heart heavy and fraught with worry about the next generation of Muslims in America. I worry that my kids will grow up feeling like second class citizens, despite being second and third generation Americans. I worry that my sons will find themselves lacking, inferior, or worse, unwelcome because they are brown and Muslim in America–not white and Christian.

For Muslim Americans, the battle we fight is not just against terrorists like ISIS, but also against preconceived notions of race and religion in America that continue to divide, rather than unite, our country.