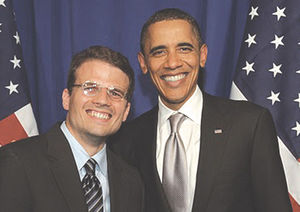 by Kip Malinosky, Chair of the Arlington County Democratic Committee

It’s also true that some Democrats have been disappointed that Obama hasn’t been able to do more. As Chris Rock put it, “Everybody wanted Michael Jordan, right? We got Shaq. That’s not a disappointment.” Let’s remind ourselves of Obama’s great accomplishments with the economy, health care, climate change and equality, to name a few.

After eight years of President George W. Bush, the economy was in free-fall, losing 700,000 to 800,000 jobs a month. President Obama did not blink. He passed the Recovery Act that invested $787 billion into the economy at a time that businesses and consumers were rapidly cutting back.As Michael Grunwald, author of The New New Deal, writes, the Recovery act “was a really big bill, 50 percent bigger than the entire New Deal in constant dollars.” It passed without one House Republican voting for it. Like Franklin Roosevelt, Obama was concerned not just with immediate recovery, but also with long term reform which led to the passage of the Dodd-Frank Wall Street reform legislation. This cracked down on the shadow banks that led to the 2008 financial crisis. The upshot of Obama’s actions: 13.7 million private sector jobs created, 5 percent unemployment, and wages/salaries that have grown faster than inflation.

When Obama announced for the presidency, he promised health care reform, and, despite unprecedented Republican opposition, the Affordable CareAct became the law. Now health care can no longer be denied or taken away from people with pre-existing conditions. The uninsured rate has dropped below 10 percent of Americans and the overall rate of healthcare cost increases has dropped significantly. And the Affordable Care Act, built on the same ideas as the Romney health care plan in Massachusetts, which cut costs while expanding coverage, received not a single Senate Republican vote.

Climate change did not have the legislative success of the Recovery Act, the Affordable Care Act or Dodd-Frank, but Obama turned to executive action to fill the void. First, it must be said that the Recovery Act included a $90 billion jump start to the green economy. Through executive action, the President’s
Clean Power Plan will strictly limit carbon dioxide; it aims for a 32 percent reduction in carbon pollution by 2030. And the recently concluded climate agreement in Paris will lead 195 nations to cut their emissions. Every Republican presidential candidate opposes President Obama’s actions to reduce emissions.

On equality, the President has made major steps forward. The first bill he signed into law wasfair pay for women with the Lilly Ledbetter Act. He signed into law the repeal of “Don’t ask Don’t Tell,” allowing members of the LGBT community to serve openly in the military. In 2012, Obama embraced marriage
equality. And, in his second inaugural address, President Obama said that the principle that “all of us are created equal is the
star that guides us still, just as it guided our forebears through Seneca Falls, and Selma and Stonewall.”

We should be proud of what the President has accomplished and celebrate these successes. Of course, we know that there is so much more work to do. We know we need to continue to focus on increasing wages, passing a plan for comprehensive immigration, ending poverty and mass incarceration. We will need to elect a Democratic president to do this, but let’s also defend the great Democratic president we have.