Add Virginia’s 2nd CD to the 10th CD, 4th CD and possibly 5th CD as potential Democratic pickups in 2016! 🙂 The Virginian-Pilot reports: “You might ask, ‘Why is now the time to leave?’ ” Rigell said in email sent to supporters. “The answer is found in why I set aside all else and sought the office: to build a strong House majority that would check and balance the party that then controlled both political branches of the federal government. With your help we did just that.”

Seriously, WTF? This guy just got elected in 2010 (defeating Rep. Glenn Nye), what’s going on here? Did Randy Forbes threaten to run against him or something? Also, who are possible Dem candidates? (Lynwood Lewis? Jody Wagner? John Miller? other? or do top-tier Dems not see this as a highly winnable district?)

An Open Letter to the 2nd  District of Virginia
I write to share with you that I will not be seeking re-election this November as your representative in Congress.  With my family in full agreement, we are confident that my season of public service is to come to a close when my term expires next January.  When I make that trip home from Washington for the last time, it will be bittersweet. We have been on a remarkable six and a half year journey; a year and a half seeking office and five years serving what I’m convinced is truly the best congressional district in America.  Consistent with the pledge I made when I first asked for your support in 2009, upon leaving Congress I will refuse all retirement benefits for which I qualify.
You might ask “Why is now the time to leave?”  The answer is found in why I set aside all else and sought the office: to build a strong House majority that would check and balance the party that then controlled both political branches of the federal government.  With your help we did just that.  We have been the driving force that has reduced discretionary spending.  Regardless of which party is in control, reducing spending is tough to do and I’m proud of the progress we made on that front.  The graph below shows how discretionary spending has come down since I went to Washington. 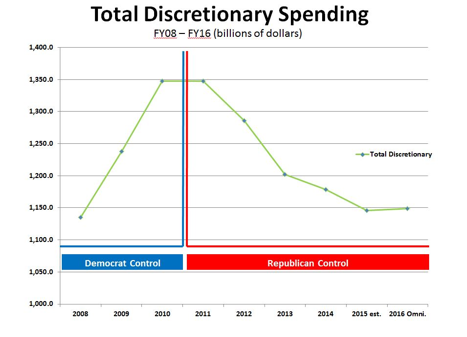 I mention that accomplishment because the five-year point of service is, to me, a point of decision:  has a meaningful difference been made and it’s time go home, or is serving in Congress a career and the hope is to serve much longer.  Given the two alternatives, my belief in term limits, and in reflecting upon what my team and I have accomplished, I am at peace about coming home.
I’ll miss serving VA-2 and seeing the many friends I’ve made across our district.   What a high privilege it is to serve this region, which includes the highest number of veterans, active duty and retired of any congressional district in the country.  Our district reflects what to me is the essence of America:  diverse, filled with self-reliant, hard-working patriots, committed to community and inspired by faith and love of country.
Of all whom I’ve met along this journey, none have impacted and meant more to my wife, Teri, and me than our Gold Star families; those who have lost a loved one in service to our country.  To each of them, I respectfully say, thank you. Thank you for helping me grasp, as best one can, the profound sacrifice that your loved one and your family made for our freedom.  Teri and I will always stand with you in honoring and remembering your loved one.
It is in the sacrifice of our veterans, and the duty each one of us has to the next generation of Americans, that I find the inspiration needed to fight for a better future.  That inspiration, that core unshakable belief in our country and in you, my fellow Virginian and fellow American, will not end with my time in public service.  I’m going to keep fighting for our country.
A full year remains in my congressional term and I want to assure you that my team and I will continue our commitment to providing you with exceptional constituent service.  In Washington, I will continue to advance and fight for the solutions that I am convinced will strengthen our country and benefit all Americans.
I also want to express my heart-felt thanks to my staff.  I am so proud of them and I am grateful for their service to you and our country.
I close this letter thinking of all the times that I have been stopped in the grocery store, at the airport or on a visit to a house of worship and so many of you offered words of encouragement and said, “Scott, thank you for serving.”  For that, and the amazing and high privilege to serve you and your families for six years, I will forever be grateful.
Mindful that I work for you, I remain
Yours in Freedom,