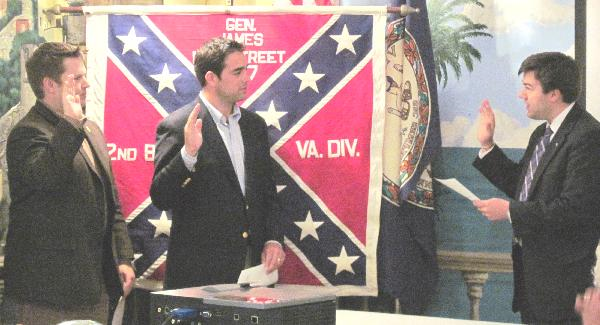 Today, of course, is Martin Luther King, Jr. Day, a holiday which reminds us of this great American’s struggle against segregation, racism and Jim Crow; and for African-American equality and civil rights in this country. Which is why I was struck by an email I received this morning from a Virginia environmental activist, including the photo to the right, and more broadly the story of a bizarre intersection between fossil fuel interests (coal in particular), the “Sons of Confederate Veterans” and the Republican Party of Virignia. Lovely, eh?

First, the photo. which comes from the July 2010 edition of “The Old War Horse” (aka, “The Voice of General James Lonstreet, Camp #1247, Sons of Confederate Veterans”),  Pictured in the center is a guy named Andrew Vehorn, a registered lobbyist in Virginia and  a member of the Republican Party of Virginia network — his groups including something called “Ronald Reagan Patriots,” as well as the Henrico County Republican Committee and the RPV Young Professionals Coalition.

Vehorn is also former “Virginia State Coordinator of Count on Coal,” as you can see on page 34 of the September 2014 edition of “Coal People Magazine” (Vehorn is pictured in an article entitled, appropriately, “Virginia Coal and Energy Commission Examines EPA Challenge”). Note that the September 2014 edition also includes bizarre, Orwellian, propagandistic, anti-environmental crap like “Coal’s Vital Role in Alleviating Energy Poverty;” “EPA’s Carbon Plan Isn’t Environmental Policy, but Pain and Politics” and “Can Low-grade Coals Thwart the EPA’s Plans?” So that’s what we’re dealing with here.

But wait, the plot thickens: the Virginia environmental leader informs me that Vehorn was hired in May of 2015 as the Director of Legislative Affairs at the Virginia, MD and Delaware Association of Co-operatives — of which the heavily fossil-fuel-fired Old Dominion Electric Cooperate (ODEC) is a member. As the Virginia environmental leader wrote me, “Evidently, the co-ops care more about sucking up to their GOP base than about African American owner-members (of which they have many) because he also is a proud member of the Sons of Confederate Veterans” (again, see photo above of Vehorn’s swearing-in ceremony).

Speaking of the electric cooperatives, check out the ODEC service area map, and you’ll note that much of the area served is in heavily African-American Southside Virginia. Despite this, note that ODEC’s leadership is glaringly lily-white (and overwhelmingly male), with not a single person of color – Asian, Latino, African American, Native American, you name it – on either their “Leadership Team” or Board of Directors.

Finally, note that the person on the left of that “Sons of Confederate Veterans” photo is Ben Marchi, former Virginia state director of the Koch brothers’ group, “Americans for Prosperity” (note: this group really should be named “Americans for Prosperity ONLY of the Koch brothers — screw everyone else”). While Marchi is no longer with “AfP” (see here for more on this group, including their 2008 “Hot Air Tour campaign, a hot air balloon cross-country tour with the slogan, ‘Global Warming Alarmism: Lost Jobs, Higher Taxes, Less Freedom.'”), the group is still very active in Virginia, unfortunately. Today, for instance – on MLK, Jr. day, no less! – these folks are keeping busy, lobbying in Richmond against the Clean Power Plan and for, among other things, less clean energy and a lot more coal, the emissions from which disproprotionately harm poor people and African Americans (for more on that subject, see the NAACP’s page, “Coal Blooded” – it’s really, really nasty).  Great stuff, huh?

I’ll just leave this with one question, to the fine folks at ODEC: is your goal to reenact Custer’s Last Stand, but this time on a hill of dirty, planet-killing, people-sickening coal (a rapidly dying industry, to boot), with a Son of Confederate Veterans helping to lead your way? If not, what are you doing to move in a different direction?