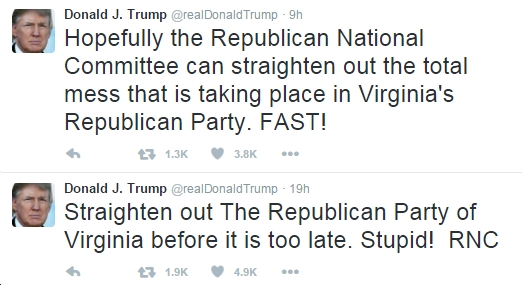 Officials in Virginia’s largest jurisdiction want to close public schools during the Super Tuesday presidential primary, saying they fear that supporters of Republican frontrunner Donald Trump could cause mayhem at the polls.

The concerns stem mainly from a Republican Party of Virginia decision — which Trump opposes — to require voters to affirm they are Republicans before casting a ballot in the March 1 Republican presidential primary.

“If you say: `I don’t want to do it,’ I have to say: `You don’t get a ballot,’” Fairfax County electoral board secretary Katherine K. Hanley told the county board of supervisors Tuesday before the board voted to ask school officials to keep students home.

“That’s what this provision is,” said Hanley, a Democrat who chaired the county board of supervisors from 1995 to 2003 and later served in the cabinet of Gov. Tim Kaine (D). “That’s about as contentious as anything we can possibly be doing in a polling place on election day.”

Or to put it another way, Fairfax leaders are apparently picturing possible scenarios somewhat like the following: 1) a Trump supporter walks into his or her polling place on March 1, intending to cast a vote for their (neo-fascist) hero; 2) said Trump supporter is told he or she must first sign the Virginia GOP’s “loyalty oath;” 3) said Trump supporter (possibly packing heat — you never know) loudly exclaims some variant of “hell no!!!;” 4) poll worker says, “sir (or ma’am), I’m sorry, you won’t be able to cast your ballot unless you sign the Republican pledge; 5) Trump supporter gets belligerent, possibly even violent; 6) all hell breaks loose.

How likely is this scenario to unfold in Fairfax County on March 1? Got me, but it doesn’t seem completely implausible. Of course, even if this scenario DOES unfold, that wouldn’t necessarily endanger any students, teachers, etc. Still, I can see why it might make a lot of people nervous. Meanwhile, if Fairfax County is seriously considering shutting down its school system – the largest in Virginia and one of the largest in the nation – what about every other school system in Virginia? Are hundreds of thousands of Virginia public school students going to be forced to stay home on March 1 due to fear of crazed, potentially violent, Donald Trump supporters? Is that really what this country – and our democracy – has come to? Ugh, if the answer to that question is “yes” or even “maybe.”

P.S. By the way, in basically every single story by Washington Post reporter Antonio Olivo, there’s a signficant mistake (or more likely, multiple mistakes). In this story, Olivo calls Fairfax County Supervisor Jeff McKay “John McKay.” Yet again, I ask: does the Washington Post have any editors? If so, what are they doing? And what’s the deal with a reporter who makes serious mistakes in article after article? Of course, this is the same paper that also employs climate science denier George Will, so…