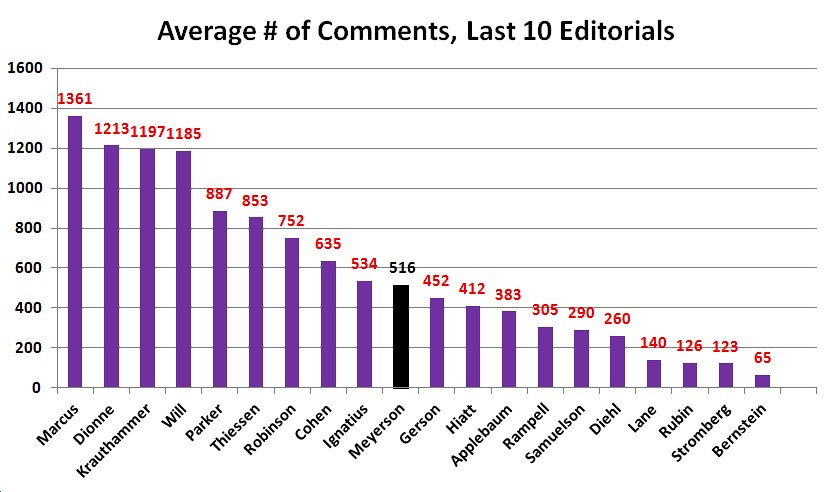 Getting ready for New Year’s Eve and generally not paying close attention to the news during the holiday season, a lot of people probably missed this item yesterday.

Journalists, liberals and many in the political and labor worlds — including presidential candidate Sen. Bernie Sanders — expressed regret on Thursday over the ending of Harold Meyerson’s weekly column in the Washington Post.

“There are few progressive voices in corporate media. @HaroldMeyerson is one of the best. His insights will be sorely missed by Post readers,” Sanders tweeted on Thursday.

…for the Post, ending Meyerson’s columns wasn’t about ideology or policies. It was about readership.

“The Post opinion section takes pride in publishing a wide range of views, including progressives Eugene Robinson, EJ Dionne, Ruth Marcus, Greg Sargent, Paul Waldman and Katrina vanden Heuvel and contributing columnists Rachel Maddow and Danielle Allen. We’ve been pleased to publish Harold’s columns for the past 13 years, but he failed to attract readers as these others have. And while our decision should never be made based only on clicks, I think it would be arrogant to entirely ignore what our readers are telling us” editorial page editor Fred Hiatt said in a statement to POLITICO.

So…Washington Post Editorial Page Editor Fred Hiatt’s explanation for why Meyerson was fired was due to supposedly Meyerson’s supposed “fail[ure] to attract readers.” Is that true?  I decided to take a look. The problem, of course, is that I don’t have access to the Post’s readership data. So, I decided to use a very rough proxy: the number of comments each columnist attracted, on average, over their last 10 posts, and rank them that way (see graph, above; click to “embiggen”). As you can see,  Dionne, Robinson and Marcus averaged more comments than Meyerson. But many others — Jared Bernstein, Stephen Stromberg, Jennifer Rubin, Charles Lane, Jackson Diehl, Robert Samuelson, Catherine Rampell, Anne Applebaum, Fred Hiatt himself, and Michael Gerson  — all averaged fewer (in several cases FAR fewer) comments as Harold Meyerson, who ranks approximately in the middle of the Post editorial page writers I looked at.

Bottom line: if comments are even close to a proxy for comparative traffic within the Washington (Com)Post family, then Hiatt appears to have fired Meyerson for reasons other than “clicks.” And if Hiatt really IS firing people based on their relative paucity of clicks (as opposed to, let’s say, their quality, value, news-worthiness, insight, etc), then he should have started by firing himself.