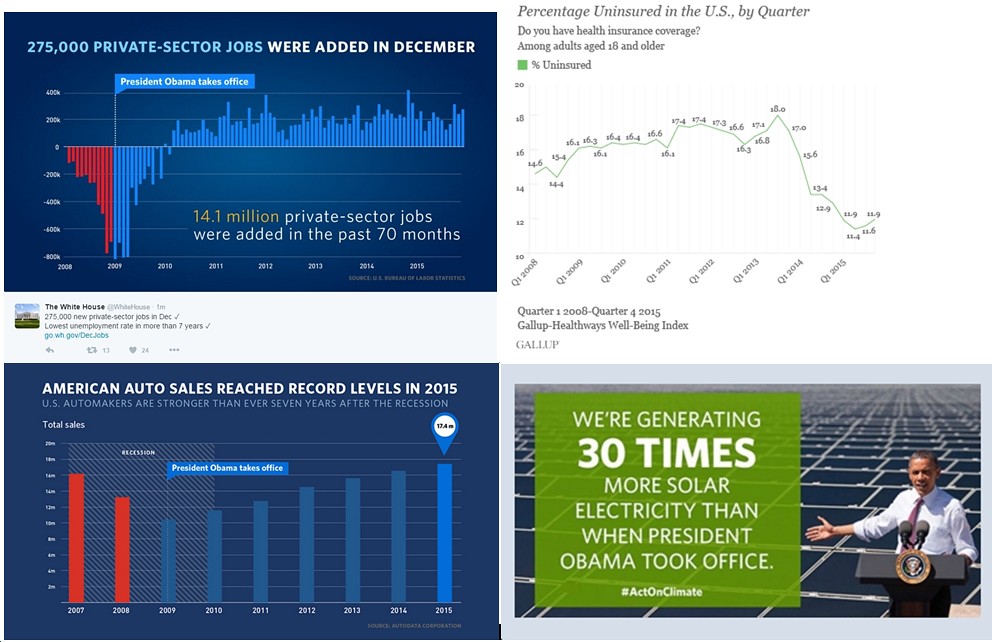 President Obama’s economic record has been superb by almost any measure, even more so when you consider the Republicans’ disgraceful “we want him to FAIL” attitude since Day 1 of his presidency. As you can see from the graphs (click to “embiggen”), the economy went from freefall under Bush/Cheney to 14.1 million new private-sector jobs and a plummeting unemployment rate under Obama/Biden. The auto industry, which was on the verge of bankruptcy at the end of Bush/Cheney, is cranking on all cylinders – literally!  Obamacare is working well, and would be working even better if all 50 states (including Virginia) had expanded Medicaid, and if Republicans hadn’t screwed over/sabotaged health care co-ops. As for the U.S. energy situation, I’ve included one infographic on solar, but I could have included many others, including on wind power (which has boomed as well), oil imports (which have plummeted), etc, etc.

All of which leaves one big question: why is President Obama’s approval rating stuck at just under 50%, when arguably he’s been the most successful president economically (and in several other ways) since…FDR? For more on that subject, see this remarkable piece by Michael Grunwald in Politico (“The Nation He Built”). And oh yeah, let’s make sure we keep this track record of success going in 2017 and beyond by electing a Democratic president — and Congress! – in November. 🙂