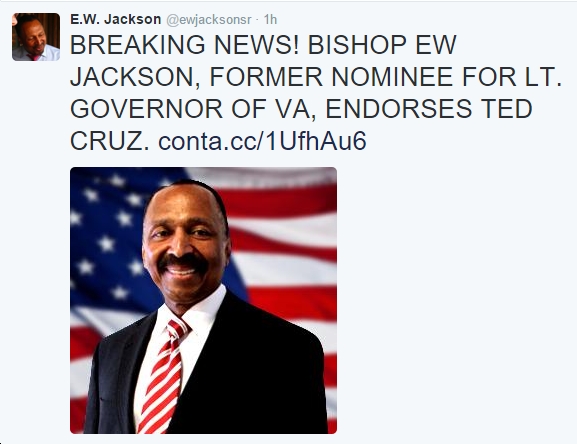 As always, raving right winger, bigot and Ted Cruz endorser E.W. Jackson has no sense of self awareness, irony, or…just plain sense. Yep, the guy who spends his days berating LGBT people, Muslims, immigrants, Barack Obama, the Black Lives Matter movement and many other African-American leaders is out with his “Five Most Racially Divisive People of 2015” list.  I bet you’ll never guess who this Ted Cruz-endorsing theocrat put on this list.

*Dorian Johnson, a close friend of Michael Brown whose account of Brown’s killing “helped inspire the protest chant hands up, don’t shoot.” According to Jackson: “The protests and riots that ensued were based on that false narrative, picked up by racial activists, and amplified by the willing media, sports celebrities, Hollywood actors, and Democrat politicians, especially the Congressional Black Caucus. There was only one problem. It was a bold, damnable, and dangerous lie.” Of course, Jackson misses the broader (and very important) point:

“Hands Up, Don’t Shoot” is not just about Mike Brown, or Ferguson,or police shooting unarmed black people. “Hands Up, Don’t Shoot” is about a fundamental question that gets to the core of what this country stands for. It’s a question that’s been open to debate since long before Darren Wilson shot and killed the unarmed Brown four months ago: Do black lives matter, and if so, how much?

*“Barack Hussein Obama.” According to crazy EW, who is pathologically obsessed with President Obama (perhaps just a wee bit of jealousy there, given that Obama has accomplished about a gazillion times more in his life than “Bishop” Jackson): “When the unrest in Ferguson surfaced, the President deployed his deputy race-baiter, Attorney General Eric Holder to the scene, who only stoked the flames.” Utterly ridiculous, of course. EW goes on to claim, bizarrely and yet again falsely, that he has “never heard [Obama] quote the line in the Pledge of Allegiance that says, ‘one nation under God indivisible with liberty and justice for all.'” Except that a quick search of YouTube finds this example, this example, and this example and…well, you get the idea; Obama recites the Pledge of Allegiance, including the “one nation under God” line, all the time. But yeah, it’s a favorite trope of racists – in this case repeated by EW Jackson – to claim that President Obama refuses to recite that line, because he’s not really American or whatever. Gack.

*Hillary Clinton, because – among other ridiculous “reasons” cited by crazy ol’ EW, she supposedly “adopted a Kwanza theme for her Twitter brand, even though most black Americans do not celebrate this made-up holiday.” Uhhh…alrighty.

*The Black Lives Matter movement, which drives crazy ol’ EW even crazier than he already is. According to Jackson (note that most of the following is either outright false or wildly exaggerated/distorted/warped):

They have ignored black-on-black crime. They have disrupted the normal lives of innocent Americans who have no responsibility for their grievances. And they have equated opposition to the LGBT movement with injustices they claim are being perpetrated against young black men. In short, the Black Lives Matter movement is an abomination that does nothing but engender hostility against the very people the black community needs to protect them and preserve some semblance of order—cops.