Why does being able to get a 12-month supply of oral contraceptives (and having insurers pay for that supply) make so much sense? Simple: as Sen. Locke explains: “Other forms of contraception last longer. Injections, IUDs… These are effective for much longer than one month. There is no medical reason for women to not obtain more than a month’s supply at a time. It is an inconvenience that actively prevents lower income women from taking full control of their reproductive health.” Or, as Sen. Barbara Favola puts it: “Virginia women have every right to make their own health care decisions. This kind of unnecessary barrier makes it more difficult for women to access safe contraceptive care by requiring them to make repetitive and unnecessary monthly trips to the pharmacy. There is no reason for it and the law needs to change.” Finally, as NARAL Pro-Choice Virginia explains: “This bill would allow women to receive a 12-month supply of birth control instead of having to pick up a prescription each month. This would dramatically increase access to birth control for women who need it, and would particularly benefit young women, low-income women, and rural women who face disproportionately-high barriers to reproductive health care.” (Note: a companion bill in the House, by Del. Patrick Hope, was “laid on the table” – aka, “killed” – by voice vote in late January) 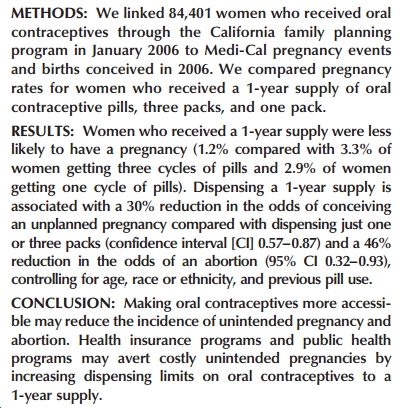 Why would anyone vote against a no-brainer bill like this? For anyone who’s against abortion, it’s particularly baffling (and infuriating), as an important study in 2011 found that “Dispensing a 1-year supply of oral contraceptive pills (OCs) to low-income women receiving family planning services is associated with a significant reduction in unplanned pregnancies and abortions as compared with dispensing a 1-month or 3-month supply.” According to the study, we’re not talking about a small effect either, but a 30% reduction in unplanned pregnancy and an enormous “46% reduction in the odds of an abortion.”

Which means that the eight hard-right Senate Republicans (Newman, Black, Carrico, Garrett, Cosgrove, Dunnavant, Chase, Suetterlein) — all virulently hostile to abortion and women’s reproductive freedom in general – who voted against Sen. Locke’s 12-month-contraceptives bill de facto voted NOT to reduce the odds of an abortion by 46%. To put it another way, those eight Senate Republicans, all ostensibly “pro life,” voted against a measure that has been proven to sharply reduce abortions, which they consider as tantamount to murder.

Why? The only reasons I can come up with are: a) their irrational hostility to allowing women easy access to oral contraceptives trumps their hostility to abortion; and b) they are doing the bidding of the health insurance industry, which doesn’t want to pay for 12 months of oral contraceptives, and they care more about corporate profits than about reducing abortions. Either way, the right wingers’ votes against this legislation completely undercuts their argument about the importance of reducing the number of abortions. Ironically (?), it’s pro-choice people like the Democrats on the committee who voted for the 12-months-of-contraceptives bill, who care a LOT more about actually, in the real world, reducing unwanted/unintended pregnancies and abortions. Ironic, eh?

By the way, I spoke last night with Sen. George Barker (D), the lone Democrat to vote with the eight hard-line, anti-abortion Republicans to “pass by indefinitely” (aka, “kill”) this bill. I also talked to Tarina Keene of NARAL Pro-Choice Virginia. And after all that, for the life of me, I’m still struggling to understand why Barker, who has received consistent 100% scores from NARAL and has been a champion on women’s health issues, voted against this bill. Apparently, Barker believes that the legislation is redundant, and that it’s already possible for physicians to write a 12-month prescription for oral contraceptives. Even assuming that’s the case, what would be the harm of voting for Sen. Locke’s legislation? Even after talking to Sen. Barker, I still don’t understand…just baffled (as, by the way, are NARAL and their allies, from what I’m told).

Bottom line: allowing women to receive 12 months of oral contraceptives and have that covered by their insurance companies is a no brainer, whether your focus is on women’s reproductive health or whether you are strongly anti-abortion. Either way, this bill should have passed unanimously, not been “passed by indefinitely.” Crazy.