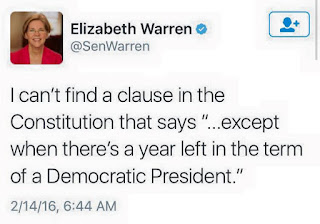 by Andy Schmookler
Saturday night, upon reflecting on the Republicans’ shocking expressions of an unwillingness to consider a Supreme Court
nomination from President Obama, I had some thoughts that I decided I’d write
up yesterday after my Valentine’s celebration with my beloved.
On my way to that task Sunday afternoon, however, I discovered that someone had written essentially the same piece, and done a good job of it.  The piece, appearing on Slate.com and written by Mark Joseph Stern, bears the title “The GOP’s SupremeCourt Gamble.”
The idea in Stern’s piece — which was also to be the heart of mine — is essentially this: The Republicans can probably get a moderate justice appointed this year, but if they block that, and if the Democrats win both the presidency and control of the Senate in the elections this November (which is not unlikely), they could end up with a much more liberal justice instead.
If Stern’s piece fully expressed my views, I would just consider myself scooped, and not bother to write anything myself. But Stern’s piece contains one point to which I object, and leaves out another point that I think bears mentioning.
First, Stern’s definition of a moderate that Obama might nominate, and that Stern thinks the Republicans would be wise to confirm, gives way too much ground to suit me. Stern writes:

There
are serious compromise candidates on the current shortlist, extraordinarily
qualified moderates like Sri Srinivasan who would likely refuse to overturn
treasured conservative precedents like Heller (establishing an individual right
to bear arms) and Citizens United (allowing unlimited corporate electioneering).

Any justice who would refuse to overturn Citizens United is, in my view, hardly
qualifies as “moderate.” That
was one of the most disgraceful decisions in the Court’s history – up there
with Dred Scot – with dire consequences for American democracy. That decision
— which itself showed utter disregard for precedent — deserves no deference
as established precedent from any justice that President Obama should consider.
What we want in a “moderate” is someone who is
fair-minded and not a right-wing ideologue. The Republican-appointed justices
on the Court have prevailed in a great many 5-4 decisions that have required
torturing the law to get a desired right-wing result. (Besides Citizens United,
the decision gutting the Voting Rights Act comes to mind.)
Any reasonable, fair-minded jurist not wedded to a
right-wing agenda would likely give us 5-4 decisions going the other way on
some crucial matters. (For example, with any such moderate justice on the Court
instead of Scalia, I strongly doubt the Court would have put the Clean Power
Plan on hold the other day.)
The Republicans may understand that the appointment of any
fair-minded, reasonable and moderate justice would be costly to them. It would
cost them the ally they’ve enjoyed, a Court that has worked with them to
advance their ideological and corporate agenda. But if President Obama puts
forward a genuine moderate with excellent qualifications and character, they
would block that confirmation at their peril.
Which leads to the second point—the one that Stern did not
make.
Stern does undercut the bogus case the Republicans make for
forcing a delay until after the elections.

Republican
presidential contenders agreed at Saturday night’s debate, and the right-wing
press jumped into action to pretend that blocking a Supreme Court nominee for
11 months is a time-honored American tradition. (It’s not.)

And
Stern also suggests that the Republicans could hurt themselves in the elections
by putting the Supreme Court front and center as an issue. Are the Republicans
really certain, he asks, “that
a presidential election entirely focused on the impact of the court on American
life—as this one surely now will—plays to their advantage?” “Most Americans,” he adds, “absolutely despise Citizens United and want to keep Roe v. Wade on the books. An election that focuses
overwhelmingly on money in politics and first-trimester abortion is a losing
election for Republicans.”
(If
“most Americans…absolutely despise Citizens
United,” why President Obama would want to nominate a “moderate” who would
leave it standing is beyond me. This is precisely the kind of argument the Democratic
president, and the party generally, should be glad to pick.)
But there’s another way the Republicans could hurt
themselves with such obstructionism.
To fail to vote on a President’s Supreme Court nominee, with
nearly a year to go in his term – it’s not as though Scalia’s death created
this vacancy only a month before the election – would be unprecedented. (At
least, so I believe. Has any Senate refused to vote on a Supreme Court
nomination submitted nearly a year before the end of the president’s term?)
Indeed, their immediate, unjustified, and wholly partisan
warning to the president not to nominate a successor to Scalia was disgraceful,
a violation of American political norms. It reveals the Republicans utter
commitment to their own power, regardless of how it shreds the American
political tradition.
Such a disgrace, in itself, could be made a potent election
issue, affecting the presidential race, and even more directly affecting the
fight for control of the Senate.
So it is not just that putting a focus on the Supreme Court
raises issues that might be disadvantageous for the Republicans in the coming
election. But it is also that they might hand the Democrats an opportunity to
expose the Republicans for the political atrocity that they’ve become.
It is true that there have been no shortage of such opportunities,
and it is true that the Democrats have often shrunk from seizing such
opportunities and making the Republicans pay a political price for their
scandalous behavior.
But this is an election year, and – as the Republicans have
lately been in disarray –the Democrats have been showing more boldness and
confidence in the political fight. Moreover, they will soon have a new standard
bearer who may be more disposed to press such a battle.
I certainly hope so. There’s so much at stake, and the
Republicans have shown themselves once again deserving of whatever political
punishment an effective Democratic Party can dish out.
There's no paywall on Blue Virginia, and we definitely want to keep it that way! If you want to help support our work, you can donate here - thanks! Also, you can sign up for our weekly email list here.