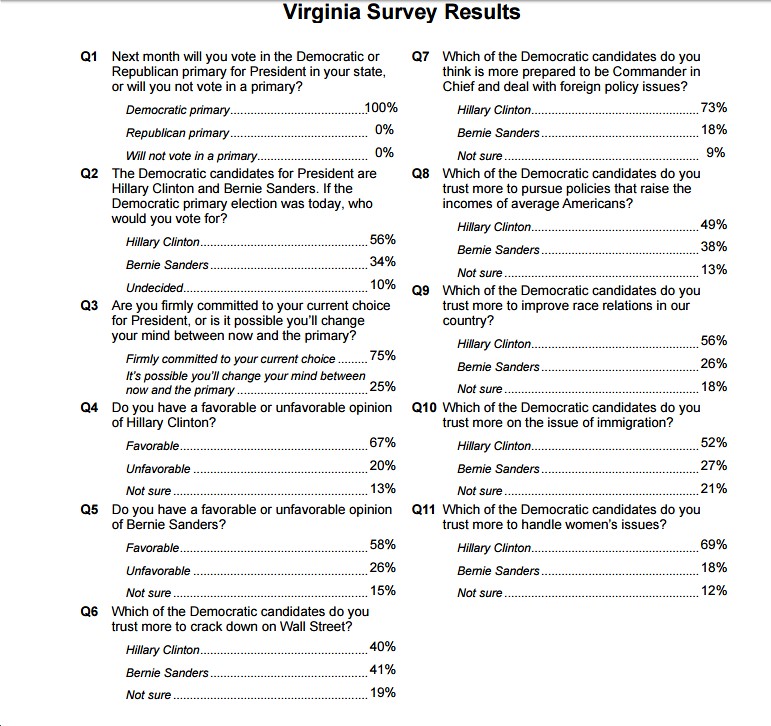 Yesterday, a new CNU poll of Virginia had Hillary Clinton leading Bernie Sanders for the March 1 primary by 12 points (52%-40%). Today, a new poll by Public Policy Polling (PPP) shows Clinton with an even larger, 22-point lead (56%-34%). That includes a 58-point lead (74%-16%) for Clinton among African Americans in Virginia. The bottom line is that, with 13 days to go until Virginia’s presidential primary, Clinton’s southern “firewall” certainly appears to be holding, at least in this state.

How’s the “firewall” looking in other, early March primary states? According to PPP: Clinton is “leading the way in 10 of 12, with double digit leads in 9 of
them. Bernie Sanders has an overwhelming lead in his home state of Vermont and also leads in Massachusetts. The race is close in Oklahoma where Clinton is ahead by just 2 points, but she has double digit leads in the other 9 states that will have primaries that week.” What’s the reason for Clinton’s huge lead? Very simple: “She leads by anywhere from 40-62 points among black voters in the nine of these states that have more black voters than the national average. Her support ranges from 63-74% with black voters in those states, while Sanders gets 12-23%.”

Of course, Sanders is trying hard to catch up among African Americans, but the problem for him is that time is rapidly running out.  Starting on February 27, with the South Carolina Democratic primary, there will be a deluge of primaries, caucuses, and delegates up for grabs. As Clinton campaign manager Robby Mook pointed out a few days ago, “the 28 states that vote (or caucus) in March will award 56% of the delegates needed to win…In total, 1,875 delegates will be awarded in the first 15 days of March, including nearly 900 on Super Tuesday alone.” So, basically, as impressive as Bernie Sanders’ campaign has been, if he doesn’t catch up in the next few weeks — and particularly he needs to make major inroads among African Americans and Latinos — the nomination could be all but over by the end of March. I’m certainly not saying he can’t catch up, but no doubt he’s got his work cut out for him. Stay tuned…