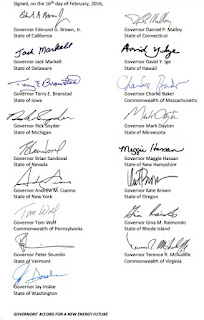 “The announcement of the Governors’ Accord for a New Energy Future shows Virginia is on the path to become a clean energy leader. These states have leading the way on clean energy and clean cars, and this announcement shows Virginia’s commitment. While the court may have temporarily blocked the Clean Power Plan, it can’t block progress toward wind and solar energy, affordable electric vehicles, and a more modern and efficient electric grid. Kudos to Governor McAuliffe for pledging to forge a path forward for climate progress and clean air.”

Sounds good, but what does this accord commit the governors to do, exactly? As far as I can tell, not much. From reading through the document, although it claims that the signatories “embrace a shared vision” of great things like expanding clean energy sources, there’s also a bunch of less-than-great (or even bad) things in here, such as:

I’d further point out that, here in Virginia, the General Assembly is dominated by anti-environment, bought-and-paid-for fossil fuel politicians. As for Gov. McAuliffe, while he has certainly been friendly towards clean energy, he also has continued to push in the 180-degrees wrong direction with regard to offshore oil drilling and new natural gas infrastructure, both of which are big mistakes. Given all that, I’m not exactly holding my breath for any positive serious action from our political “leaders” on kickstarting a clean energy economy here in Virginia.

To end this downer of a post on a bit more positive note: as a pro-clean-energy friend of mine put it, at least this accord – albeit vague and nonbinding – represents some sort of benchmark by which to judge the governors who signed on. Also, to the extent that this moves the conversation more towards a focus on the optimal ways to move towards a clean energy economy, not WHETHER to move towards a clean energy economy, that’s a good thing. Anyway, we’ll see.