There are a gazillion reasons why both Virginia State Senate Majority Leader Tommy Norment (R) and Minority Leader Dick Saslaw (D) need to go. Actually, make that a gazillion and one.

Both are corrupt slimeballs, of course, with Norment literally in bed with a lobbyist and Saslaw arguing in crude language why ethics laws aren’t even necessary! As an added “bonus,” Saslaw is completely incompetent as “leader,” having managed to lose control of the State Senate under his hand-drawn lines, repeatedly missing major problems in his caucus, heavily tilting the scales — for absolutely no good reason — against a highly-qualified Latino candidate (Jaime Areizaga-Soto in 2011), a highly-qualified Muslim-American candidate (Atif Qarni in 2015) and a highly-qualified female candidate (Emily Francis in 2015), etc, etc. Saslaw also managed to throw away hundreds of thousands of dollars on a hopeless special election in a 2:1 Cooch district, in a kamikaze mission to save Sen. Phil Puckett’s seat for the Dems, after totally failing to prevent Puckett’s bug-out in the first place. We could go on and on all day.

But in a way, the latest episode — as reported this afternoon by the Washington Post (note to Post editors: note what I just did there? yep, it’s called “credit” and a “link,” aka “journalistic ethics”) and Virginian-Pilot — takes the cake. In short, State Sen. Louise Lucas talked to reporters at both papers and vented her frustrations with Dick Saslaw, as well as her appalling treatment by both Saslaw and (worst of all?) Tommy Norment. First, check out this excerpt from the Post article about Dick Saslaw. 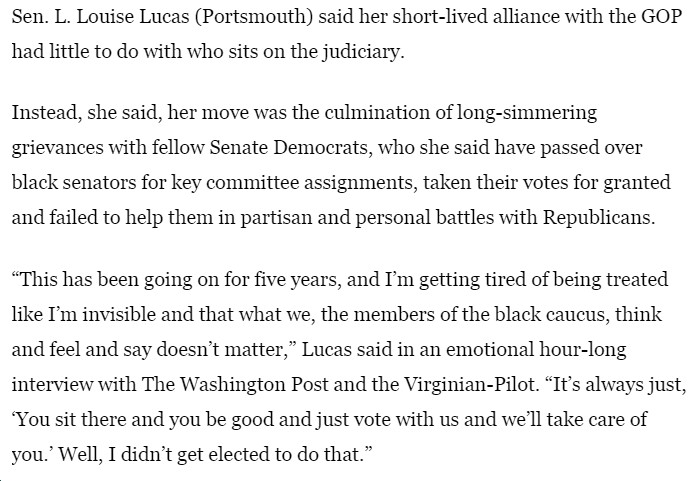 Great, eh? Just one point here: both the Post and Virginian-Pilot headlines try to make this about Democrats in general treating African American lawmakers badly, when as far as I can tell, it’s just Dick Saslaw (the same guy who treated Jaime Areizaga-Soto and Atif Qarni like crap; sensing a pattern here?!?).

Now, check out this unbelievable, can’t-make-this-s***-up scene with Tommy Norment and Louise Lucas. It’s like “stereotypes come to life” when it comes to Norment. Great job by Lucas, though, in shoving it right back in his arrogant, obnoxious face! 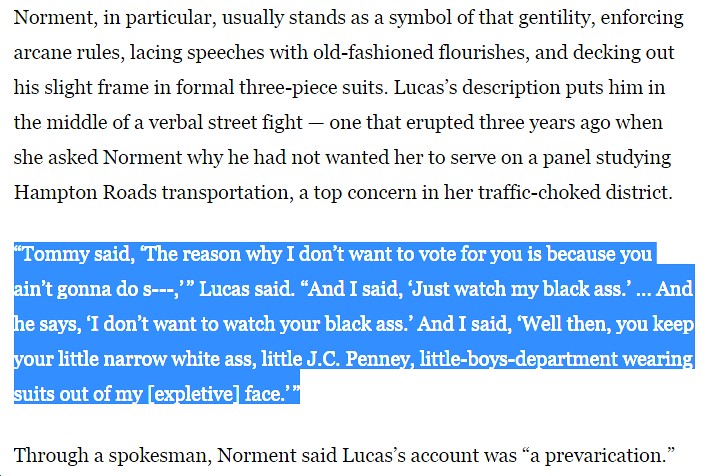 “Prevarication?” Cmon, tough guy Tommy, why don’t you just come right out and call Louise Lucas a liar?!? But seriously, you expect us to believe someone who literally is in bed with lobbyists (yourself) over Louise Lucas? Riiiight.

Last but not least, just for good measure, we have Sen. Barbara Favola (D-Arlington) — who Saslaw helpfully worked to “clear the field” for in 2011 — instead of saying “enough is enough” and calling for Saslaw’s ouster as “leader,” defending the indefensible. Worst of all is the absurd, would-be-laughable-if-it-weren’t-so-pathetic comment that Saslaw’s “values are in the right place.” This is the same Dick Saslaw who thinks ethics laws are a big joke, who went on a bizarre tirade against the Clean Power Plan, and who is basically a wholly-owned subsidiary of Virginia corporations like Dominion Power. Ugh. 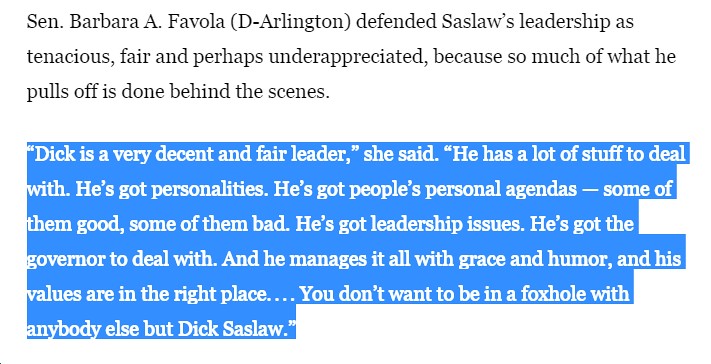