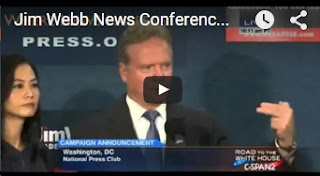 A wise decision, among other reasons because Webb would never have had the money to run a viable third-party race for president.

“We looked at the possibility of an independent candidacy. Theoretically it could be done, but it is enormously costly and time sensitive, and I don’t see the fundraising trajectory where we could make a realistic run,” Webb said during a speech to the World Affairs Council of Dallas/Ft. Worth, Texas, according to his spokesperson.

By the way, I’d been guessing at this for a few weeks, as Webb had largely disappeared from view — TV, his Facebook page, Twitter, etc. Plus, I never saw a Webb bid for president as viable, whether as a Democrat or (especially) as an independent. The combination of Webb’s lack of financial resources (or willingness/ability to raise money), his lack of interest in actually campaigning, and his iconoclastic (to be charitable) political stances would have made such a run utterly doomed from the start.

Personally, what I’m hoping is that Webb now goes back to what he’s best at — writing. Or if he wants to stay involved in politics, to talk about the main themes he made the center of his 2006 U.S. Senate campaign against George Allen. In particular, I’d love to hear Webb talk during 2016 (and beyond) about the rise of income inequality (as he said, the rich getting richer, the poor getting poorer and the middle class getting squeezed) and what he thinks we should do about it! Also, if he’s got a bit of spare time, he might want to sit down with climate scientists like Michael Mann and get himself a quick tutorial on why it’s time for a transition off of fossil fuels and onto clean energy — ASAP.