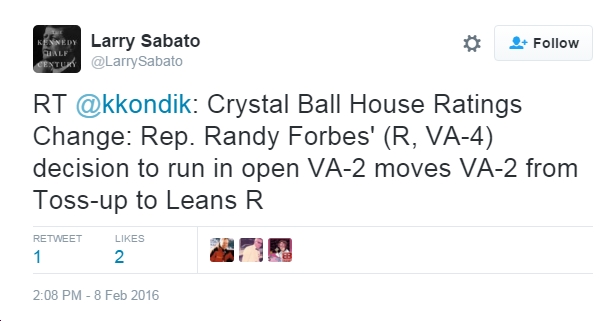 With the announcement this afternoon by Rep. Randy Forbes (R-4th) that he’ll be “leaving behind his 4th Congressional District to seek election next door in the 2nd District,” Larry Sabato’s “Crystal Ball House Ratings” have shifted, making the new 4th CD a presumed shoo-in for whoever the Democratic nominee is (I’m assuming State Senator Donald McEachin). As for the 2nd CD, which Rep. Scott Rigell (R) is vacating after his current term, Sabato has shifted it from “Toss-up” to “Leans R.”

My big question: will Democrats have a candidate against Forbes in the 2nd, and if so, will it be a strong candidate? Among other reasons why we need a candidate, the 2nd leans a bit Republican, but it’s certainly winnable in a presidential election year, particularly if Republicans nominate an extremist (Trump, Cruz, and Rubio all qualify) for president. Also, I’d note that although I was no Scott Rigell fan, at least that guy has some sense, sanity, and willingness to “reach across the aisle,” as the saying goes. Forbes, in contrast, is a wild-eyed right-wing ideologue. Why do I say that? Check out Right Wing Watch for more, but here are a few highlights on this nut.

P.S. How about Forbes resign from his current job, given that he’s now running in the 2nd CD???