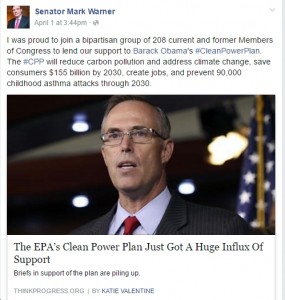 I’ve said it a million times, and I’ll say it a million more: anyone who denies climate science is unfit to hold public office. Of course, just because you accept the overwhelming science of man-made global warming doesn’t in and of itself make you a paragon of virtue, but denying it is simply a non-starter in terms of taking a person seriously. Same thing, by the way, if you deny evolution, gravity or that the earth revolves around the sun. As soon as you do that, I will no longer listen to you on anything you have to say about anything, because clearly your thinking is severely disordered at a fundamental level.

Speaking of which, check out the comments on Sen. Mark Warner’s Facebook post, which states that he “was proud to join a bipartisan group of 208 current and former Members of Congress to lend our support to Barack Obama‘s ‪#‎CleanPowerPlan‬,” and that “The ‪#‎CPP‬ will reduce carbon pollution and address climate change, save consumers $155 billion by 2030, create jobs, and prevent 90,000 childhood asthma attacks through 2030.” All true statements, although personally I wish that either the CPP went a lot further or that Congress would get its act together and put a substantial price on carbon. But until we toss out the climate science deniers – shocking coincidence, they’re almost all Republicans and/or major recipients of fossil fuel industry largesse – this is probably the best we can do from a public policy perspective at the federal level to combat the #1 threat to the future of life on our planet – including the life of our own fine species, homo sapiens sapiens.

As for Warner’s Facebook post, what I found striking — albeit completely unsurprising — were the bat****-crazy comments left by right-wing trolls who have watched wayyyy too much Faux “News,” by people being paid by the fossil fuel industry to leave comments like these, or by “useful idiots” for fossil fuel interests. Comments like: “Climate change scare is the BIG HOAX, perpetuated by lying scum politicians like you;” “YOU ARE A FLAMING IDIOT, BENT ON MAKING US A THIRD WORLD NATION.;” “This communist revolutionary Obama is doing everything he can to denigrate, demean, debauch and ultimately to destroy this nation;” and possibly my favorite, “Warner, you are an Islamist terrorist who, like Kane, is an Obama puppet.” LOL

Again, none of this is surprising, as you see these nasty, crazy, ignorant comments just about any time there’s an article related to taking action against global warming. The question is where are the comments from the vast majority of people who “believe” (not that science is a matter of belief, of course) in climate science and who believe we need to take action? Here on this blog, the other day I posted on efforts by state AGs to support the Clean Power Plan and possibly to prosecute fossil fuel companies for fraud, and received numerous comments along the lines of the ones Sen. Warner got (I deleted most of them, as I will not allow climate science denial — or racism, misogyny, other forms of bigotry, etc.- on this blog).

In contrast, I received VERY few comments saying “way to go Mark Herring!” Again, why is that? Whatever the reason(s), to be blunt, it makes me VERY angry that “good people” do nothing (because they “lack all conviction?”) while the “worst are full of passionate intensity.” This is the exact type of behavior by supposedly “good people” which lets “evil flourish.” By the way, I saw the same thing recently with Del. Mark Levine, who got absolutely excoriated, in the most personal and vile of terms, for his position on guns. And guess what? Yep, yet again, the ones in the vast majority were almost nowhere to be found, leaving Levine almost completely on his own (note: I’ve seen the same with others, so it’s not unique to Mark Levine).

Other than complaining about this phenomenon, I’ve suggested over the years that environmental groups, gun violence prevention groups, etc. invest some time and resources into creating a social media rapid reaction force or whatever you want to call it. So far, though, I haven’t seen it, which means that the comments sections of newspapers, blogs, Facebook, etc. are mostly ceded to the climate science deniers, etc. Almost needless to say, I think that’s a huge mistake, especially given research that shows that “even a fractious minority wields enough power to skew a reader’s perception of a story, that “[u]ncivil comments not only polarized readers, but they often changed a participant’s interpretation of the news story itself.” In other words, it’s not harmless; quite the contrary, it’s very harmful to allow the climate science deniers to pollute comment sections with their idiocy. So why allow it? Got me. But given the existence of comments sections, it seems to me that it behooves environmental organizations (and, for their part, gun violence prevention groups) to fight back. So far, though, I’ve seen no evidence that they’re doing so — to all of our detriment.